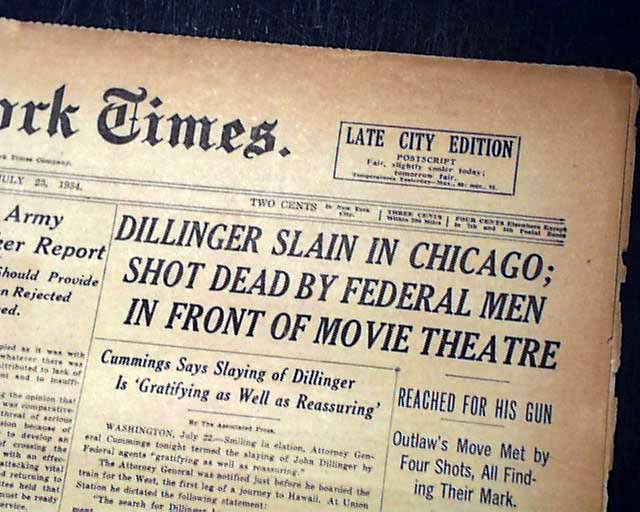 The front page has a nice 3 line, 3 column headline on the death of the notorious gangster John Dillinger which reads: "DILLINGER SLAIN IN CHICAGO; SHOT DEAD BY FEDERAL MEN IN FRONT OF MOVIE THEATER" with several subheads including: "Reached For His Gun" "Outlaw's Move Meet by Four Shots, All Finding Their Mark" "Had Lifted His Face" "Desperado Had Also Treated Finger Tips With Acid to Defeat Prints" "Two Women Wounded" and: "Agents, Tipped Fugitive Was Going to Theatre, Waited While He Saw Show".
The report continues on pg. 10, where there is a banner headline: "Dillinger Trapped By Lure of Moving Pictures Depicting Gunman Career". Among the many other page 10 reports are: "Dillinger Defied Capture For Year" "Slaying Detailed By Federal Chief" "Outlaw Blurred Tips Of Fingers" Also a two column photo of John Dillinger, a chronology of his criminal career and other related reports. Too much text to photograph all. Great reporting on the death of one of the most famous gangsters of the 1930s.
The front page has another gangster report in a one column report: "Three Doomed Men Flee Texas Prison" plus: "Trio of Killers, One of Them an Aide of Clyde Barrow, Escape in Waiting Car".
Complete in 34 pages, some margin chipping throughout as well as small margin tears, generally good condition.