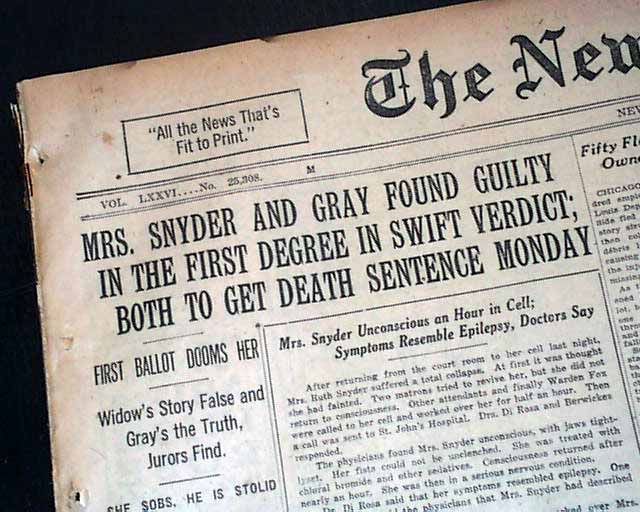 The top of the front page has a three column headline: "MRS. SNYDER AND GRAY FOUND GUILTY IN THE FIRST DEGREE IN SWIFT VERDICT; BOTH TO GET DEATH SENTENCE MONDAY" with subheads that include: "First Ballot Dooms Her" "Widow's Story False and Gray's the Truth, Jurors Find" and more. (see) Much more inside.
Other news, sports and advertisements of the day with front page reporting on the aviator Charles Nungesser flight across the Atlantic in which they became missing. Complete with all 52 pages, browning and a little wear along the central fold, generally good.

wikipedia notes: Ruth Brown Snyder (1895January 12, 1928) was executed for the murder of her husband, Albert Snyder. She was electrocuted (by 'state electrician' Robert G. Elliott) at Sing Sing Prison on January 12, 1928, along with Judd Gray, her lover and co-conspirator. In 1925 Snyder began a series of affairs that ended with a thin, mousy, and unremarkable man named Judd Gray. Gray, a corset salesman, and Snyder met in varying Manhattan hotels for their adulterous trysts. The relationship wasn't enough for Snyder; she began to plan the murder of her husband, enlisting the help of her new lover.


Snyder persuaded her husband into a $48,000 life insurance policy and began varied attempts to kill him, all of which he survived. Finally on Sunday, March 20, 1927 Snyder's assassin Gray opened the side door to the couple's sprawling New York home and, armed with a weighted sash, attempted to bludgeon Albert Snyder. Judd Gray was such a slight man his vain attempts at murdering Snyder managed only to awaken him. Albert Snyder grabbed Gray by the throat and began to strangle him, knocking his attacker's tie pin loose in the process. Ruth Snyder took over the operation, grabbing the weighted sash and killing her husband with a crushing blow to the head. The couple garroted Albert Snyder's neck and stuffed his nose full of chloroform soaked rags for good measure.

The second stage of their plan was to stage the murder as an accident. Snyder moved her valuables around the house in her attempt to make them appear missing. She hid her jewels under the mattress and hid her fur coats in the closet after Gray's refusal to steal them. Her criminal ineptitude was only beaten by Gray's attempts to stage a break-in. He upturned chairs, ripped up pillows, opened drawers, and hid the murder weapon in the basement in Albert Snyder's toolbox covered in ash. Gray left the house after refusing to knock Ruth Snyder unconscious, instead binding her hands and feet.

The Queens Police department made short work of Snyder's well rehearsed story. Upon finding Gray's tie pin, he was arrested and both were tried together. The public was so inflamed by her lurid behavior they called for her execution before it even reached the courts.

The final moments of her execution were caught on film with the aid of a miniature camera strapped to the ankle of Tom Howard, a Chicago Tribune photographer working in cooperation with the Tribune-owned New York Daily News. The picture is still controversial.