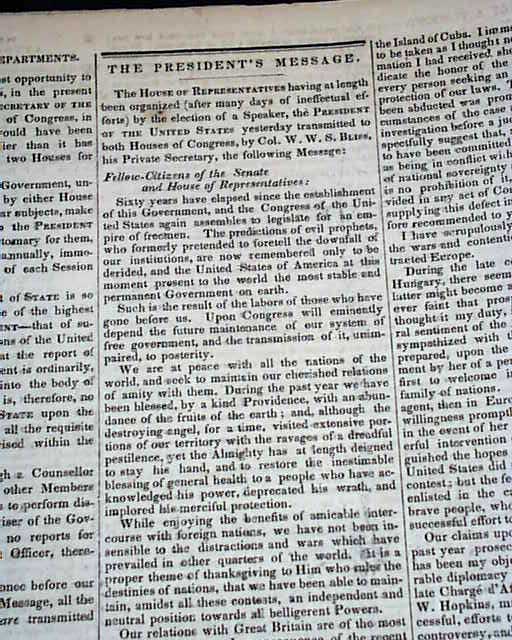 
DAILY NATIONAL INTELLIGENCER, Washington, D.C., Dec. 25, 1849  Most of the ftpg. is taken up with reports from "Congress" including several mention of "...Mr. Davis, of Mississippi..." which was Jefferson Davis, who would become the President of the Confederacy.
Much of pages 4 and 5 are taken up with: "The President's Message", being the annual state of the union address, signed in type: Z. Taylor. The very lengthy report is a report on the events of the year 1849 including some talk on the Gold Rush and the events ending the Mexican War, plus so much more. Included also are detailed reports from the Secretaries of the Navy, War, and Interior (much on California in the latter).
Terrific to have this content in a newspaper from Washington, D.C.
Eight pages, archivally rejoined at the spine with some spine loss to the front and back leafs. Various mends to tears at the edges. Minimal effect to pages 4 & 5 with Taylor's address although partial loss to about 7 words near the spine.