Home > Back to Search Results > An interesting look into the devious mind of Adolf Hitler...
Click image to enlarge 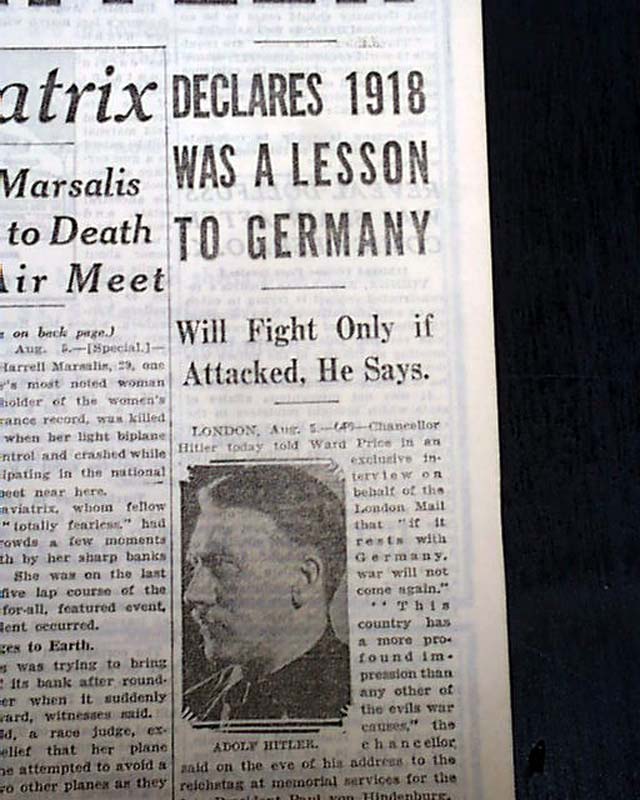 An interesting look into the devious mind of Adolf Hitler...


CHICAGO DAILY TRIBUNE, Aug. 6, 1934  Just a terrific banner headline which gives evidence of the devious & manipulative mind of Adolf Hitler: " 'WAR MEANS RUIN'--HITLER". The last column heads: "Declares 1918 Was A Lesson To Germany" "Will Fight Only If Attacked, He Says".
In hindsight these headlines and the text seem incredible. Portions of the report include: "...if it rests with Germany, war will not come again. This country has a more profound impression than any other of the evils war causes...It is the disciplined conviction of the Nazi movement that war can benefit nobody but only bring about general ruin. Nineteen-eighteen was a lesson and a warning for us...Germany's...claims upon Europe do not involve risk of such disaster...and believe me, we shall never fight again except in self-defense..." with so much more. He also promises that: "...We shall not attack Austria...".
The article includes a photo of a rather young-looking Hitler.
Complete in 30 pages, this is the "rag edition" printed on very high quality newsprint meant for institutional holdings. In great condition as such, 4 small binding holes at the blank spine.