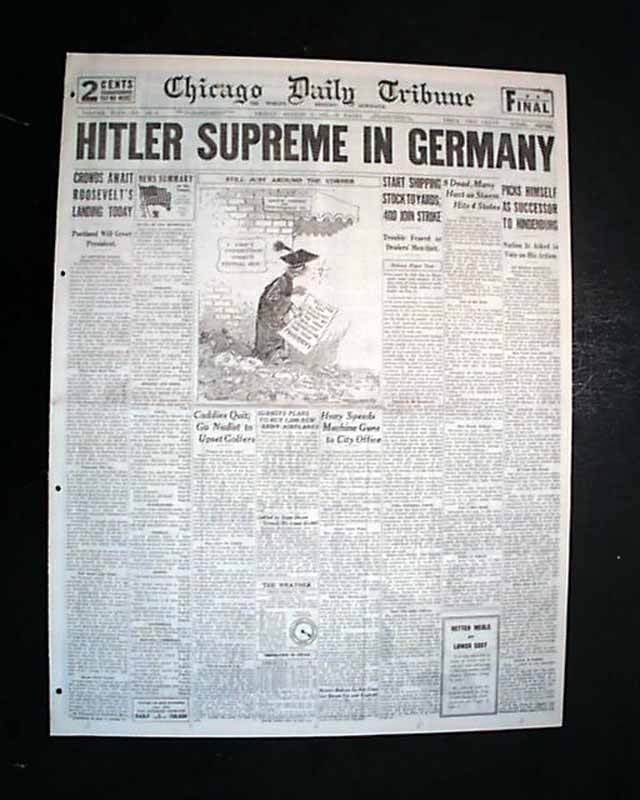 
CHICAGO DAILY TRIBUNE, August 3, 1934  The bold, banner headline announces: "HITLER SUPREME IN GERMANY" with the last column heads: "Picks Himself As Successor To Hindenburg" "Nation Is Asked to Vote on His Action."
The text begins: " 'The president is dead! Long live the president!' best describes the way in which Germany mourns the death of President Paul von Hindenburg  pays tribute to the new president, the Austrian born lance corporal of world war days, Chancellor Adolf Hitler...Within a few hours after the 86 year old president's death Hitler, in a series of lightning-like moves, made himself absolute dictator of Germany..." with much more carrying over to pages 2 & 3.
Among the reports inside: "Europe Worries On Future With Hitler At Helm".  Part of the back page banner headline announces: "Hitler Seizes All Power as Germany Mourns Death of President Hindenburg...". The entire bkpg. is taken up with photos, six of which are about Hitler.
Complete in 32 pages, this is the "rag edition" printed on very high quality newsprint meant for institutional holdings. In great condition as such, 4 small binding holes at the blank spine.