Home > Back to Search Results > Adolph Hitler calls for the extermination of Jews......
Click image to enlarge 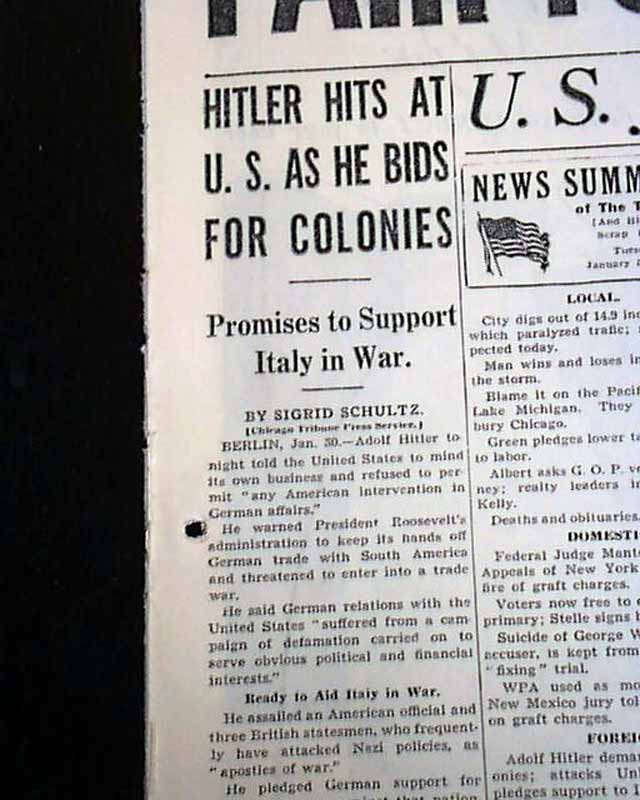 Adolph Hitler calls for the extermination of Jews......


CHICAGO DAILY TRIBUNE, January 31, 1939  The first column on the front page is headed: "HITLER ITS AT U.S. AS HE BIDS FOR COLONIES" and "Promises to Support Italy in War". The text begins: "Adolf Hitler tonight told the United States to mind its own business and refused to permit 'any American intervention in German affairs'..." with more.
But the more historic report is less conspicuous at the top of page 5: "Charges Jews Stir War" with a portion of the report noting: "Blaming Jews for the world war and asserting they also are responsible for the war fever raging now, Hitler said: 'A war started by international Jewry will not result in communism and victory for the Jews, as they hope, but in the destruction of the Jews in Europe..." with more.
This is considered one of the more blatant statements by Hitler calling for the extermination of the Jews and was a catalyst for the Holocaust.
Complete in 24 pages, this is the "rag edition" printed on very high quality newsprint meant for institutional holdings. In great condition as such, 4 small binding holes at the blank spine.