Home > Back to Search Results > 1940 attempt to overthrow the U.S. government fails...
Click image to enlarge 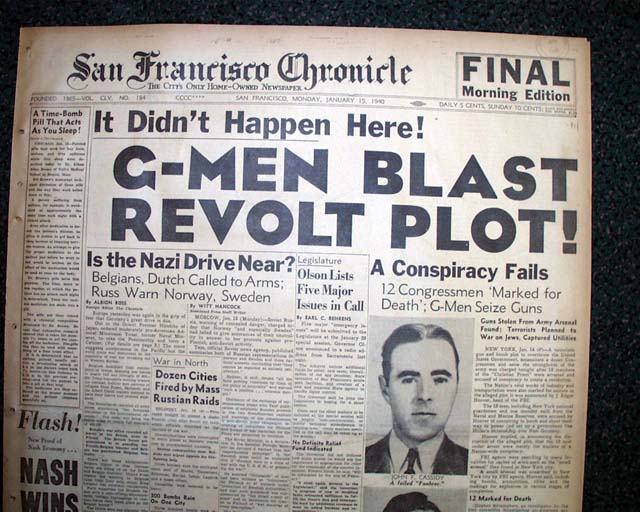 The front page has a 3-line banner heading: "It Didn't Happen Here! G-MEN BLAST REVOLT PLOT!," with subheads: "A Conspiracy Fails," "12 Congressmen 'Marked for Death'; G-Men Seize Guns," "Guns Stolen From Army Arsenal Found; Terrorists Planned to War on Jews, Captured Utilities," with much to follow. The dramatic headline visually captures the fear of conspiracies, attacks, and overthrows that were prevalent during this tumultuous time in history. Great for display.

Complete in 22 pages, other news of the day including reports regarding WWII are found throughout. Nice, evenly toned condition, with small binding holes down the left margin.

Note: This issue is being offered as a piece of history. We at Rare Newspapers offer such items being mindful of the truths that "Those who fail to learn from history are doomed to repeat it" (W.C.), and "To educate a man is to unfit him to be a slave" (F.D.).