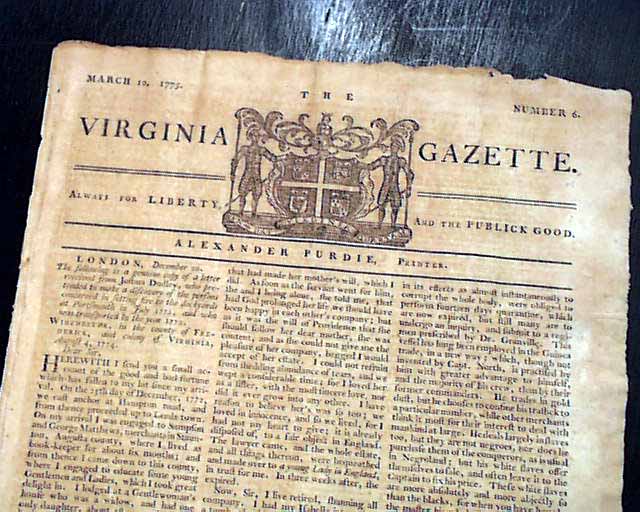 This newspaper was published by Alexander Purdie, a distinction to be made since there were three newspapers of this title printed in Williamsburg during the early period of the Revolutionary War. A very rare opportunity for a scarce title from colonial Virginia.
Part of the front page has a report on the ship St. Stephen, noting in part: "...This vessel has long been employed in the Guinea trade in a new way...He trades in gold dust...He deals largely in slaves too, but they are not negroes, nor does he purchase them of the conquerors, as is usual in Negroland; but his white slaves offer themselves to sale & often leave it to the Captain to fix his price...for all his slaves are bound to him, body and soul. The simple negro comforts himself what the term of his bondage lasts only  for life...".
Half of page 2 is taken up with a document headed: "New England - In Provincial Congress, Cambridge, February 9, 1775" which is an address: "To the Inhabitants of Massachusetts Bay" which begins: "Friends and fellow sufferers, When a people, entitled to that freedom which our ancestors have nobly preserved, as the richest inheritance of their children, are invaded by the hand of oppression, and trampled on by the merciless feet of tyranny, resistance is so far from being criminal that it becomes the Christian and social duty of each individual...". It continues with terrific rhetoric on the duties of the "friends & suffers" of Massachusetts to be steadfast in their efforts to preserve their freedom & resist the oppressions of the British. It concludes with: "...you never will submit your necks to the galling yoke of despotism prepared for you; but, with a proper sense of your dependence on God, nobly defend those rights which Heaven gave, and no man ought to take from you." with the letter signed in type by the President: John Hancock.
Page 2 has two more documents from the Mass. Provincial Congress, each signed in type by: John Hancock, one noting in part: "Whereas it has pleased Almighty God, the just and good governor of the world, to permit so great a calamity to befall us as the present controversy between Great Britain and these colonies...", calling for a day of a day of thanksgiving and prayer, etc. The other notes in part: "...that the great law of self-preservation calls upon the inhabitants of this colony immediately to prepare against every attempt that may be made to attack them by surprise...recommended to the militia in general, as well as the detached part of it in minute men, that they spare neither time, pains, nor expense at so critical a juncture in perfecting themselves forthwith in military discipline..." and more.
Page 3 has a report from Savannah concerning Georgia agreement to the Continental Association, and their sending representatives to the 2nd Continental Congress. And yet another fine letter from London which includes: "...your cause gathers strength in this kingdom every day, for now it is plain, beyond a doubt, that the measures taken against America are intended finally to subvert the liberties of this country...but the sword being once drawn against you will produce something very like a civil war in this country, in less than 12 months..." and also that: "...that the Congress of the states of America...having fixed on stopping all imports into America from Great Britain the first of this month & all exports from America to Great Britain after the first of January..." with more on this.

Included with this issue is a single sheet "Supplement" of the same date. It begins with a letter concerning the valor of Virginia troops in regards to the British: "On reading the account of the battle between the brave Virginians and their savage neighbours, it brought to my mind the keen resentments & mortifying reflections that must naturally kindle in the breasts of an experienced general, brave officers, and intrepid soldiers to remember that the professed design of Britain, in maintaining standing armies in America was the protection of the colonies..." with more on this. A great letter.
Then a report concerning the ship Beulah and it arriving with goods banned by the non-importation agreement.
The balance of the Supplement is almost entirely taken up with items concerning relations between England and the colonies. One letter begins: "Real patriotism is a virtue of that exalted nature which will induce individuals to set aside every private advantage when such happens to clash with the interests of the community...".
Complete in 6 pages with the Supplement, a large and handsome coat-of-arms engraving in the masthead, never-trimmed margins, very nice condition. 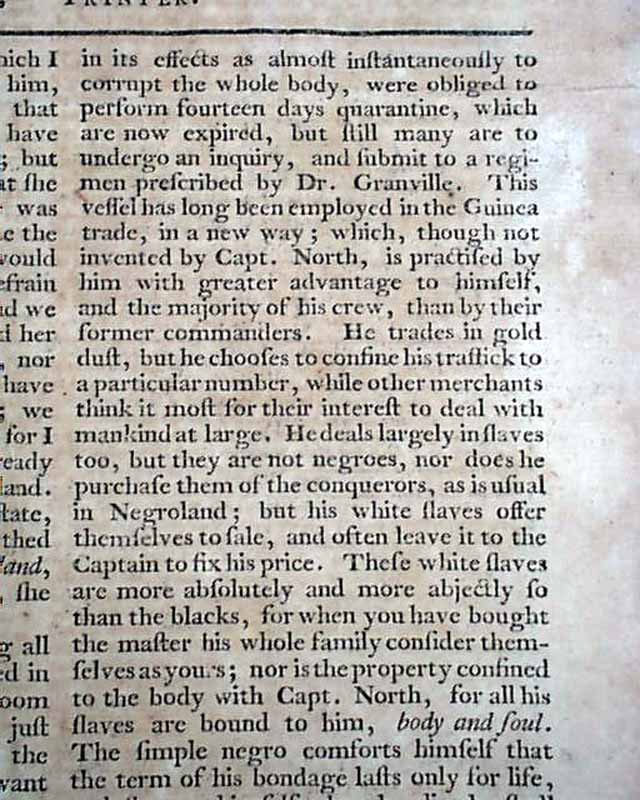 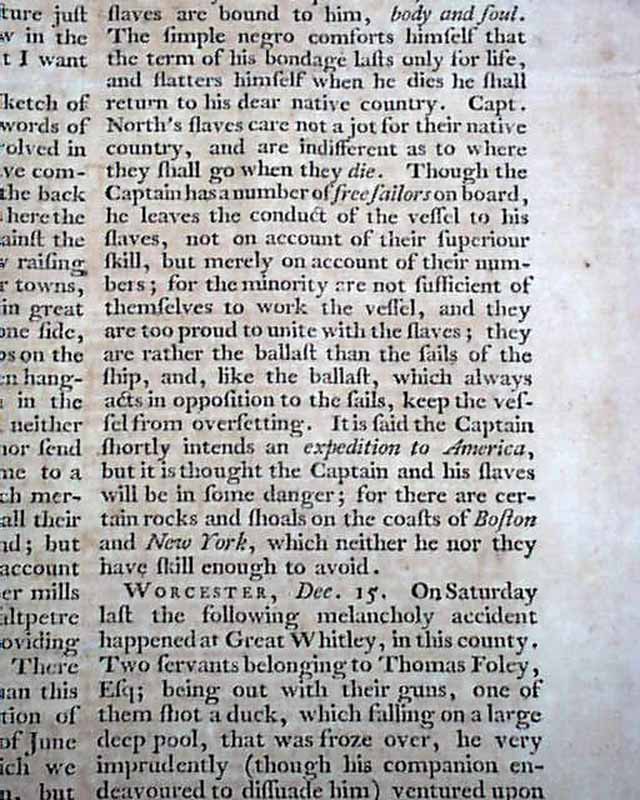 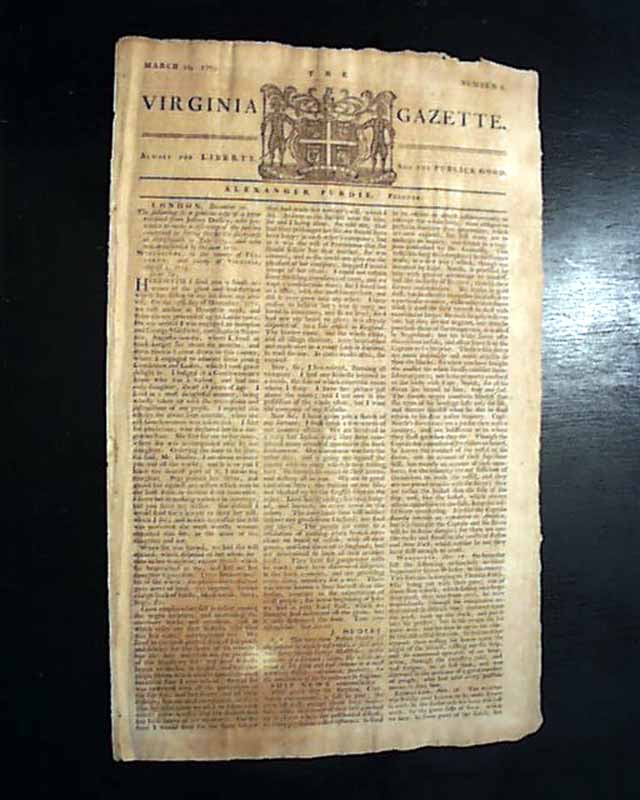 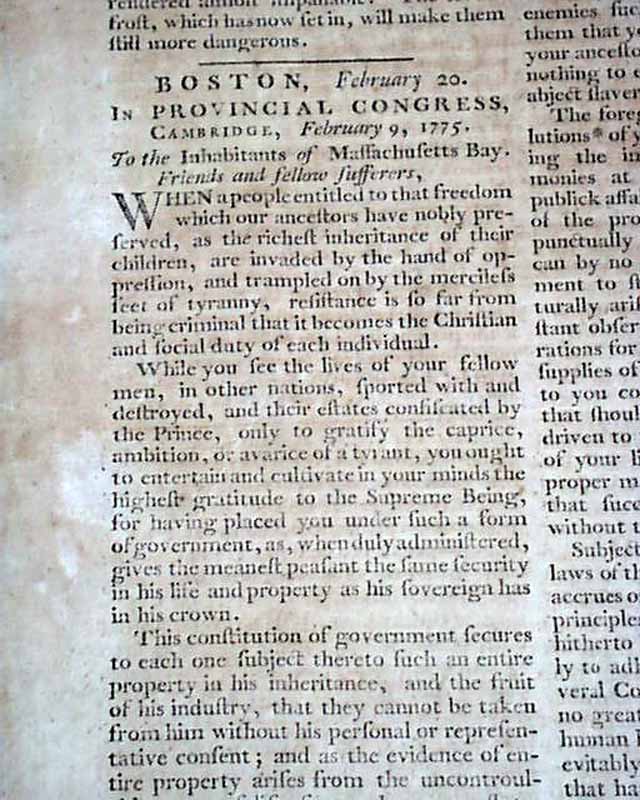 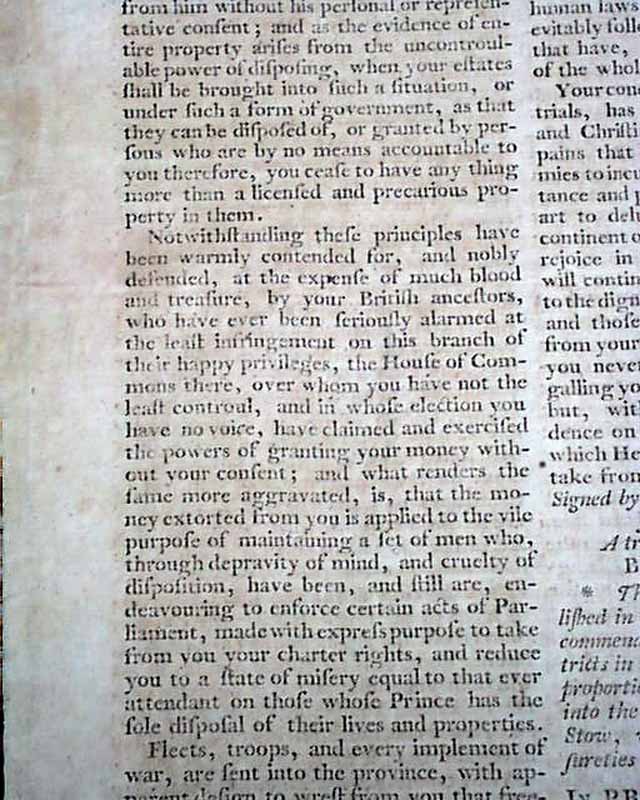 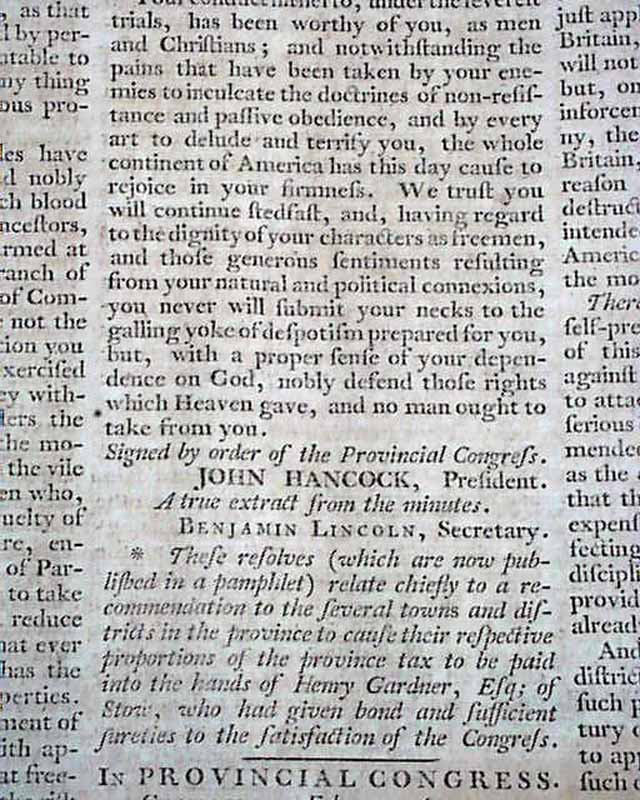 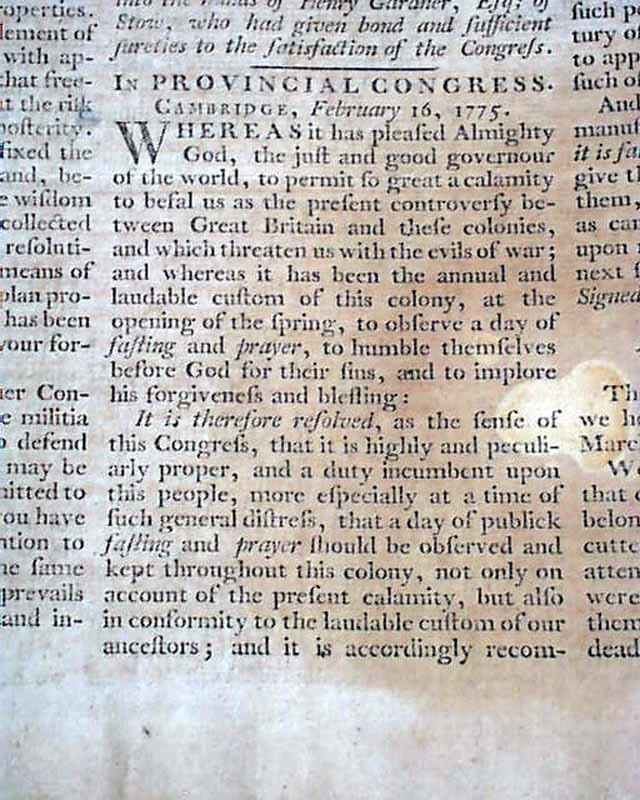 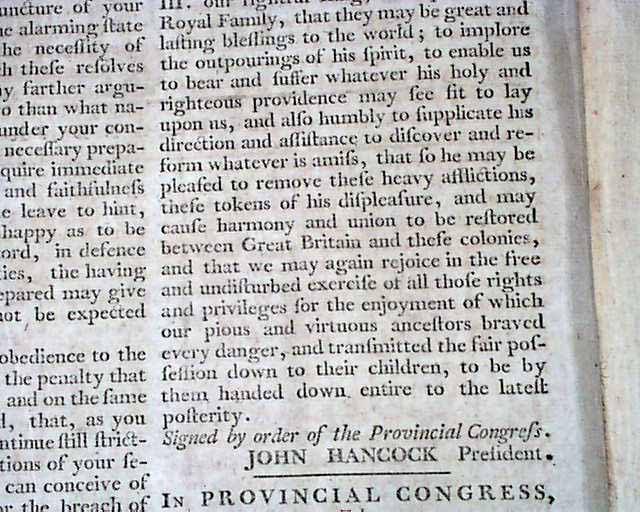 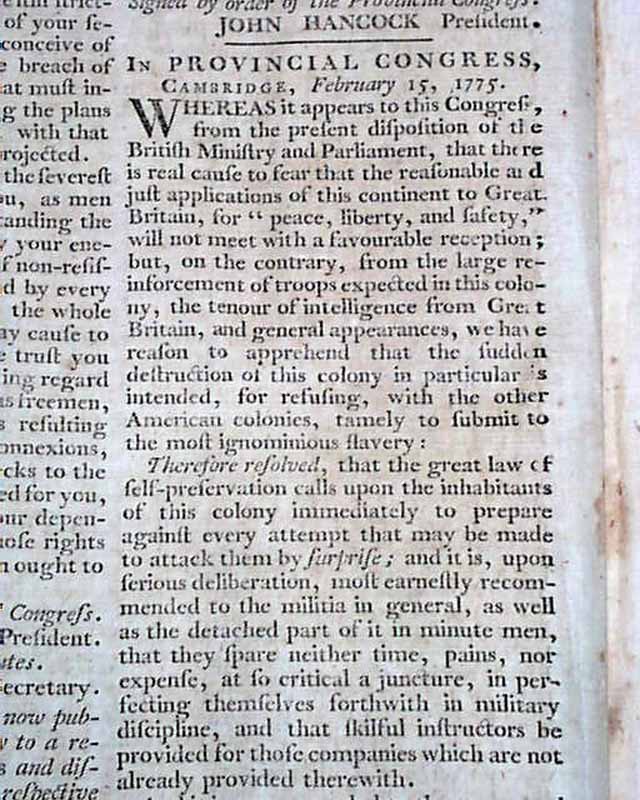 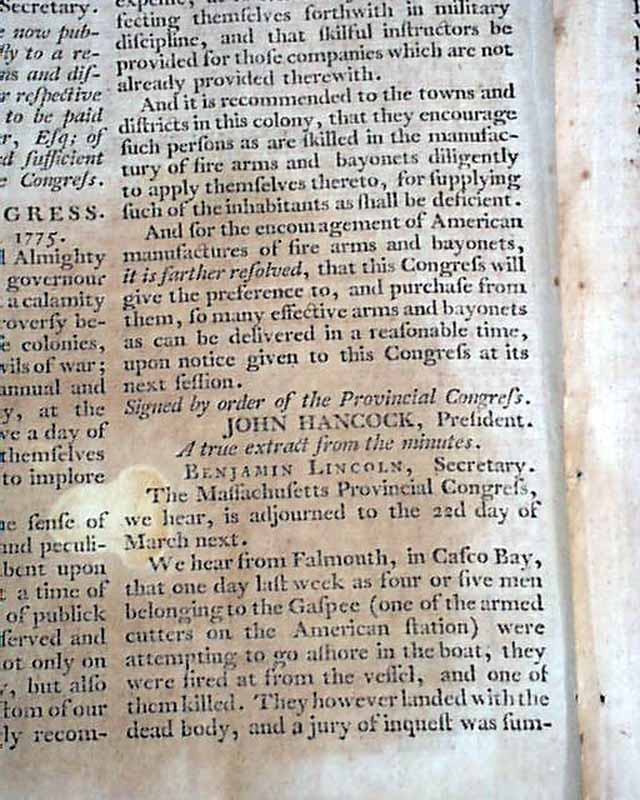 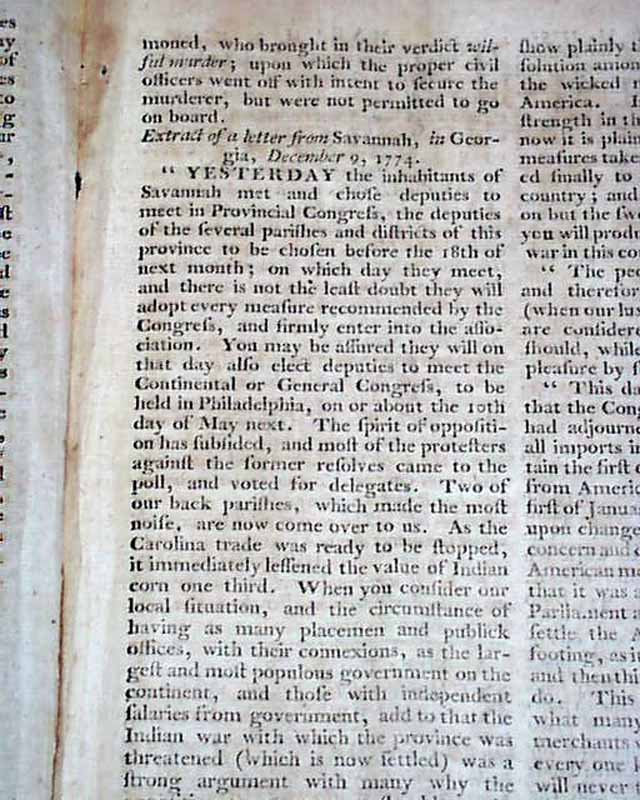 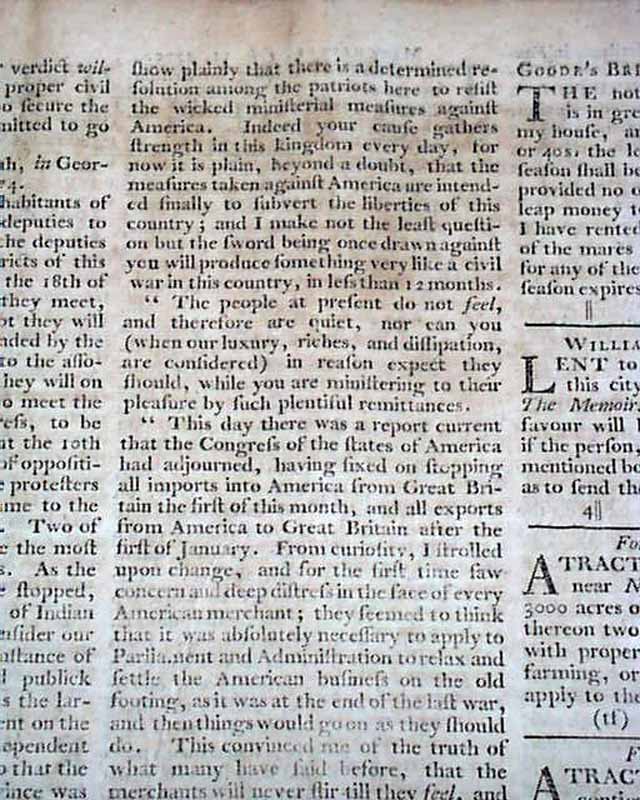 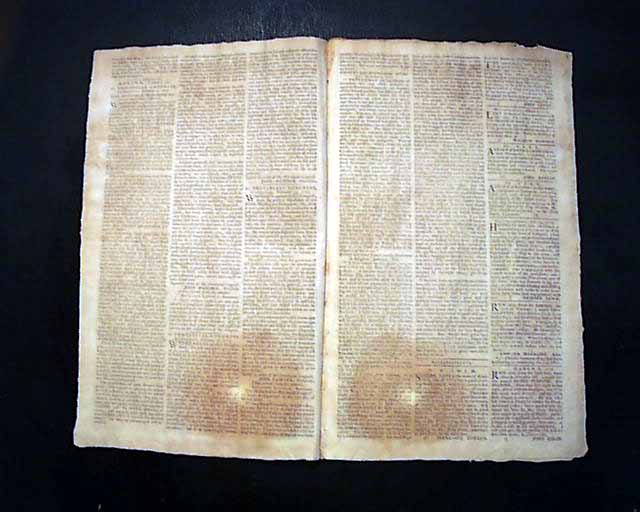 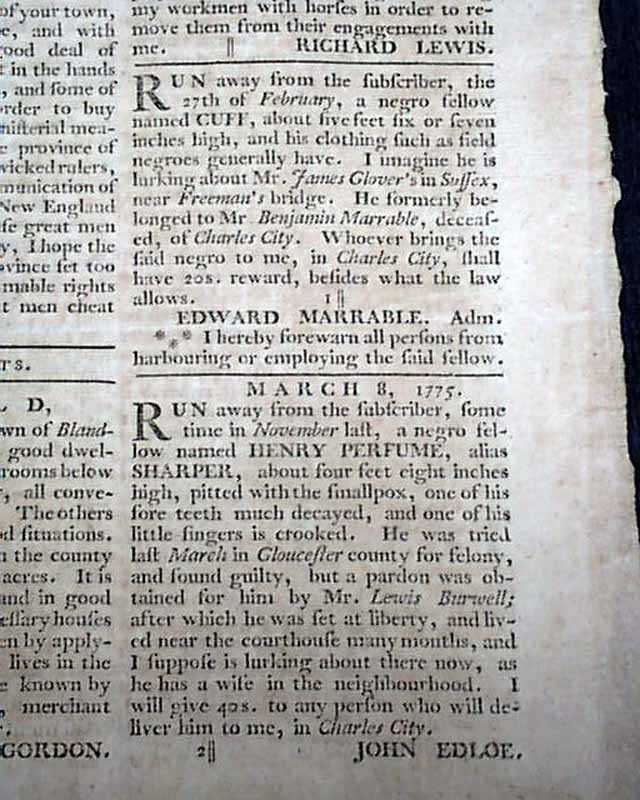 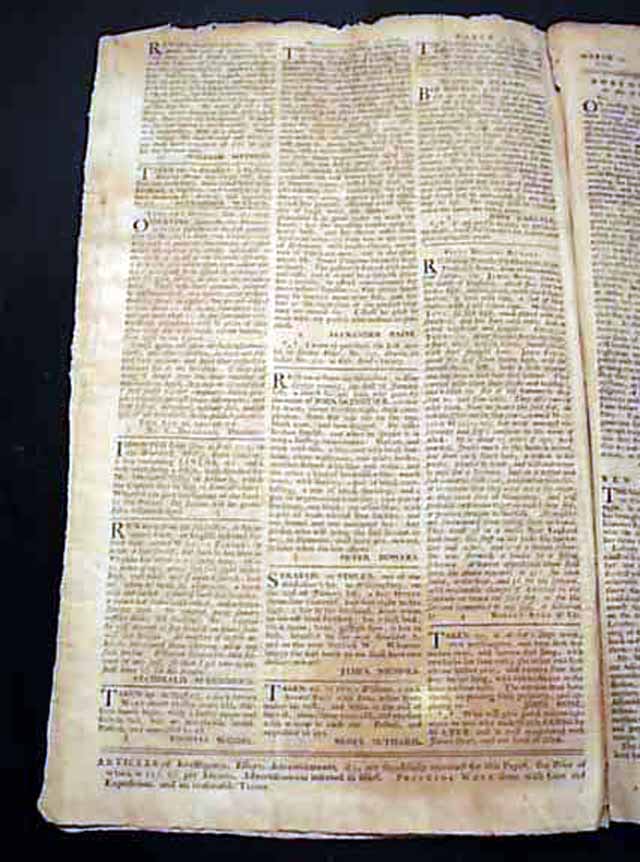 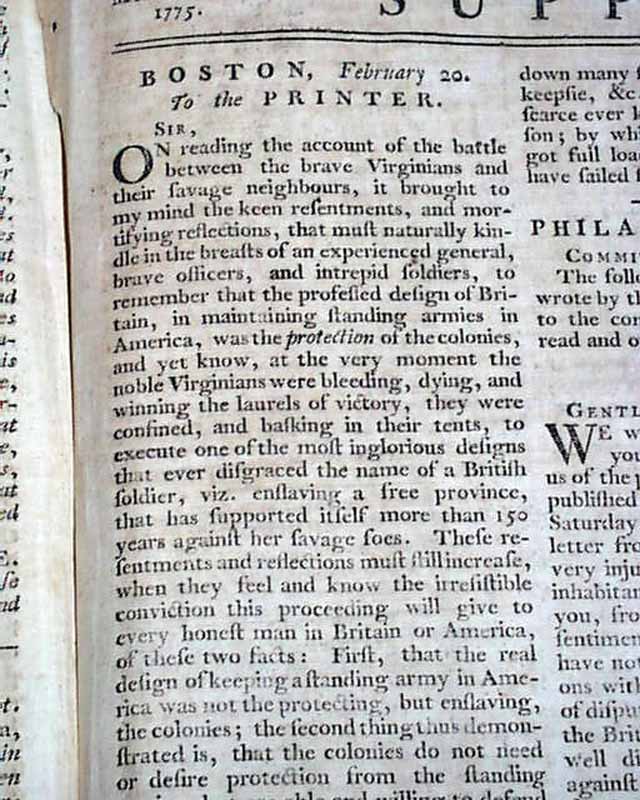 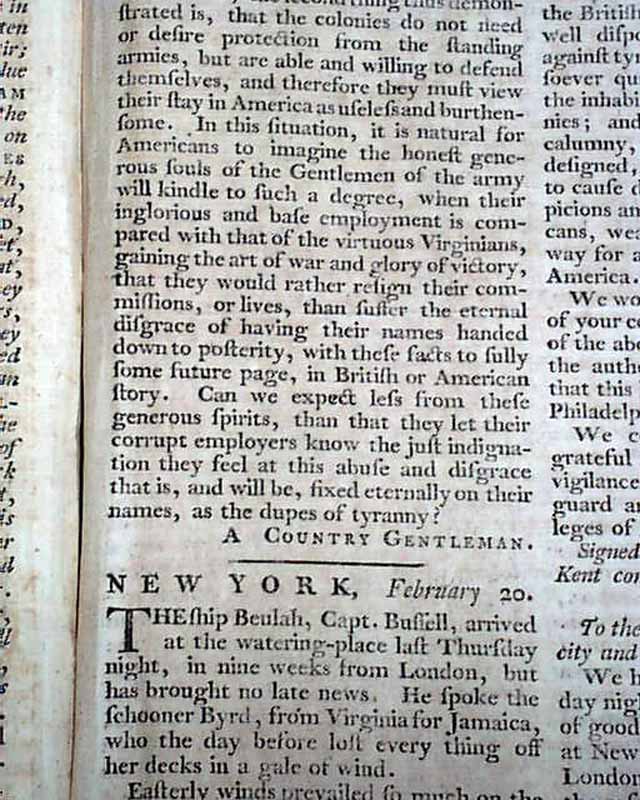 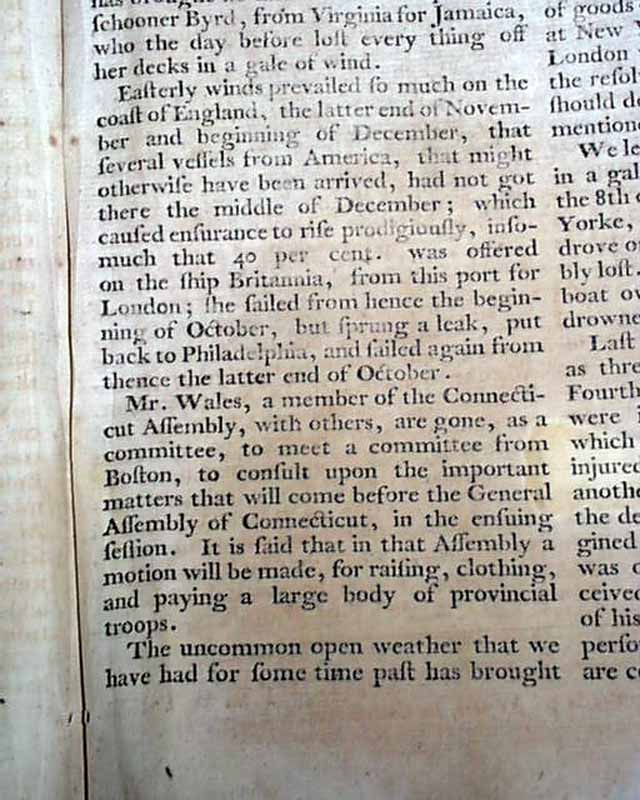 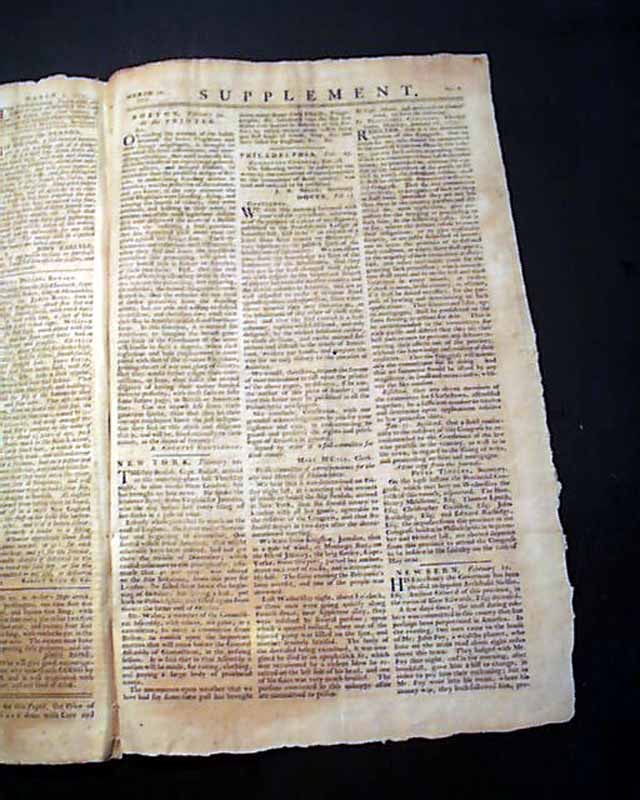 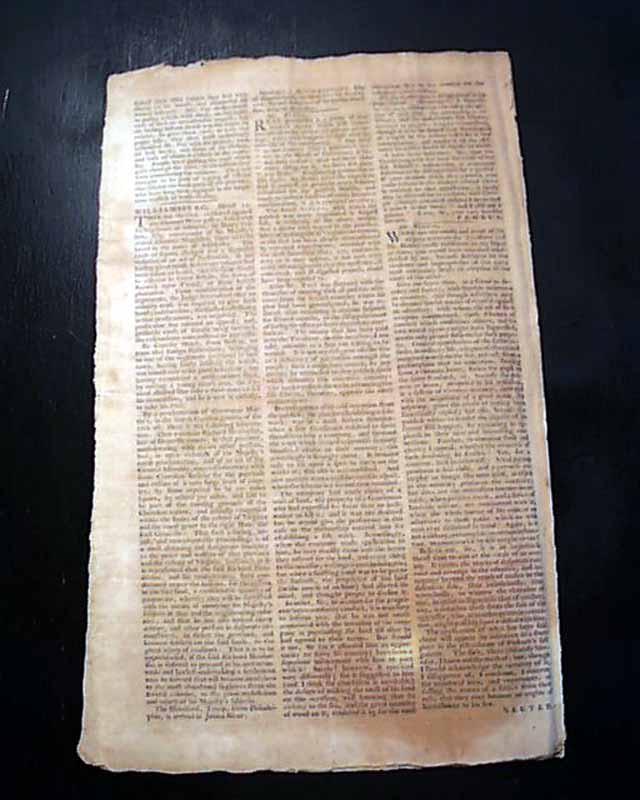