Home > Back to Search Results > Why can't the North live on their own?...
Click image to enlarge 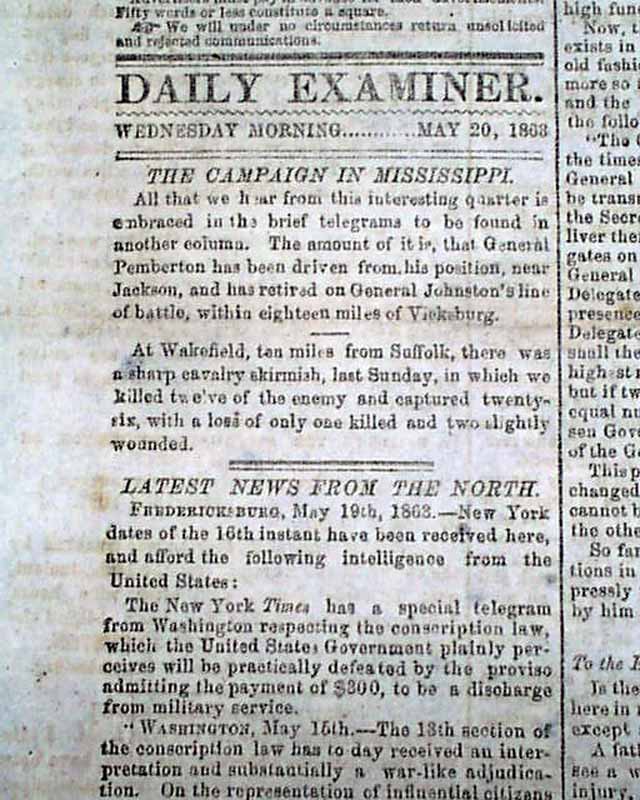 Why can't the North live on their own?...

A very nice newspaper not only from the Confederacy, but from the capital of the Confederates States.
Among the front page items are: "The Campaign In Mississippi", "A Rough Diamond", "From Hooker's Army", "Latest From the North" and nearly 3 columns on: "Act & Resolutions of the Congress of the Confederates States...An Act to Lay Taxes for the Common Defense & carry on the Government of the Confederates States", plus other smaller items.
The back page includes the always interesting editorial, this one beginning; "What is the meaning of this cuckoo cry of the North that they are waging war to save the 'life of the nation'? Is there no life for them except in a Union with the South? The Confederate States & people can support a national existence very well by themselves; why cannot the North do likewise?..." with much more. Another report begins: "The military resources of the South were never more ample than now...". Other military news on the back page as well.
Complete as a single sheet newspaper with a full banner masthead, never bound nor trimmed and in great condition.