Home > Back to Search Results > Black Thursday of the 1929 stock market crash..
Click image to enlarge 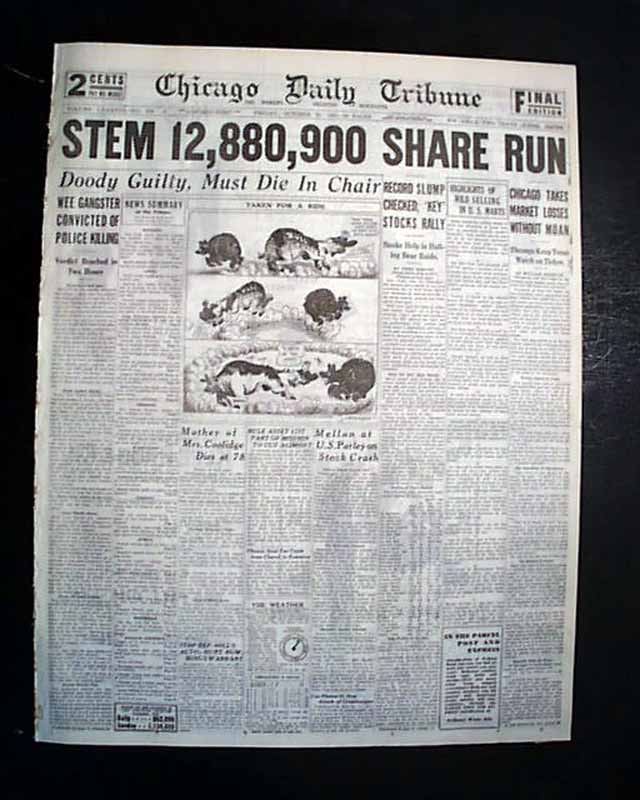 This notable issue reports the infamous "Black Thursday" on Wall Street which would forever change society & begin the Great Depression.
The banner headline announces: "STEM 12,880,900 SHARE RUN" with various one column headline reports: "Record Slump Checked; 'Key'Stocks Rally" "Banks Help in Halting Bear Raids" "Chicago Takes Market Losses Without Moan" "Throngs Keep Tense Watch on Ticker" "Highlights Of Wild Selling in U.S. Marts" "Mellon at U.S. Parley on Stock Crash". The reporting continues on inside pages.
The back page is filled with photos and has a portion of the banner headline reading: "...Stocks Slump, Then Rally in Record Trading Day", plus there is a nice photos with the caption beginning: "Extra Police Are Called Upon to Quiet the Crowds Around the New York Stock Exchange...".
It is interesting that despite the gloomy facts newspapers typically put a positive spin on a disastrous situation. It is evident in these headlines, and is commonly found in newspapers across the country.
This was the first day of the "crash" and began a tumultuous seven days for the stock market. After the crash, the Dow continued sliding for 3 more years, bottoming out at 41.22 on July 8, 1932 after its high of 381.2, losing 90% of its value, on Sept. 3, 1929. It would take 25 years for the Dow to again reach this mark.
Complete in 52 pages, this is the "rag edition" printed on very high quality newsprint meant for institutional holdings. In great condition as such.