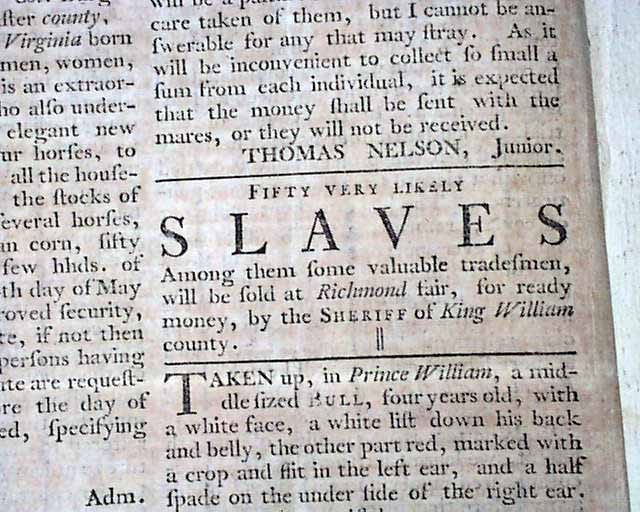 This newspaper was published Alexander Purdie, a distinction to be made since there were three newspapers of this title printed in Williamsburg during the early period of the Revolutionary War. A very rare opportunity for a scarce title from colonial Virginia with terrific content.
Almost two-thirds of the front page is taken up with an article pointing out the tensions between America and England. One item notes: "...that when the Scarbourgh should arrive in England with an account of our proceedings in the province, and when the Suffolk Resolves, with the acts of the Continental Congress thereupon, should be received at the British Court, this province, & all America, would immediately be declared and treated as in a state of rebellion!...".
Page 2 continues with much rhetoric regarding the troubles between England & the colonies, including a few bits: "...the people of England are satisfied that the liberties of America and of England are one, & therefore that to resist the invasion of them is a common cause..." and: "...letters of the American Congress written with so much spirit, found reason, and true knowledge of the constitution, have given more real uneasiness to Administration than all the other proceedings of the Congress...Lord North is still firmly resolved to maintain the just supremacy of Great Britain over her colonies..." and a bit noting; "The remonstrance of the American Congress  laments, in the most pathetick terms, that the defence of their dearest rights & liberties compels them to take such measures as must injure the merchants & manufacturers of Great Britain, & bring infinite distress upon their fellow subjects, to whom they are far from imputing the attempts made to enslave them & which they are determined to resist at every hazard."
Page 3 has similar content, with a report beginning; "The present dispute between the Ministry & our Colonies, with its fatal consequences to the trade & manufactures of Great Britain, hath, at last, roused the English merchants trading to America...".
Attached to this issue is the single sheet "Supplement" of the same date and slightly smaller size. One-third of the ftpg has a great letter which includes in part: "I must begin this letter with declaring that I am not an American...I will not enter into the question of the right of taxation of American by Great Britain...offer to your consideration only the expedience of using force on this occasion..." and further on: "...Is it not a truth that without trade this country may be a province of some empire...Is it not la truth that a war with America bars all the avenues to, and means of, this trade?"
The front page also has a proclamation by Governor Dunmore, in which he declares the the First Continental Congress was an outlaw meeting, and that the coming Second Continental Congress is illegal and that: "...require all magistrates & other officers to use their utmost endeavours to prevent any such appointments of deputies and to exhort all persons whatever within this government to desist from such an unjustifiable proceedings, so highly displeasing to his Majesty."
The fine content continues. Another item mentions: "...the Ministry being determined to enforce the Acts, and recommending it to the people of America to look to themselves, and be prepared against all events..." and that: "....the troops at Boston under General Gage are to be sent home with all the Crown officers in America...It is to be hoped...that in spite of all our open & secret enemies, the people will have virtue & sense enough to baffle any such designs of the Ministry, by recurring to the old Dutch motto, 'United we stand, by dividing we fall', and thereby preserve their dearest rights & privileges...".
Four pages plus the single sheet "Supplement", never-trimmed margins, large & handsome coat-of-arms engraving in the masthead, very nice, clean condition.