Home > Back to Search Results > Details on the death of Jesse James...
Click image to enlarge 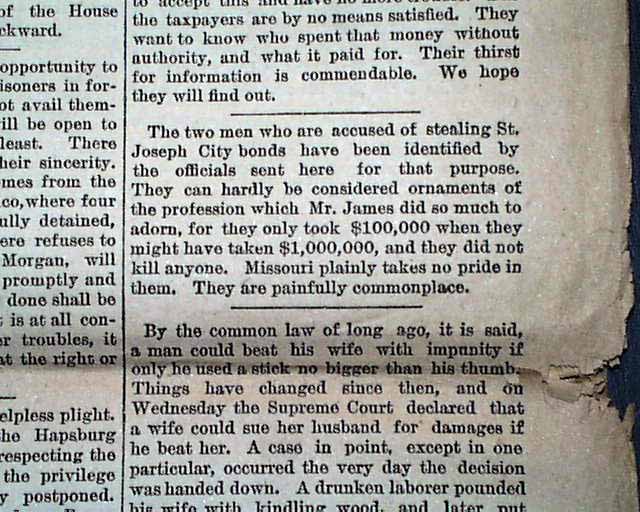 Details on the death of Jesse James...

The most notable content is the page 10 article: "The Death Of Jesse James" "A Talk With City Marshal Craig" "How the Robber Lived in St. Joseph--Opinion In Missouri As to the Governor & the Fords". The article takes over a full column & has much detail, including: "...came running past my house...crying, 'Jesse James is shot'...went inside ...found the outlaw, lying on the floor & his wife holding his head in her lap, while the carpet & her dress were saturated with blood. Mrs. James was wild--frantic..." and so much more.
The front page has an inconspicuous report noting: "The two men...accused of stealing St. Joseph City bonds have been identified...They can hardly be considered ornaments of the profession which Mr. James did so much to adorn for they only took $100,000 when they might have taken $1,000,000 & they did not kill anyone. Missouri plainly takes no pride in them...".
Sixteen pages, tabloid-size, never bound nor trimmed, the right corners are missing & some edge tears.