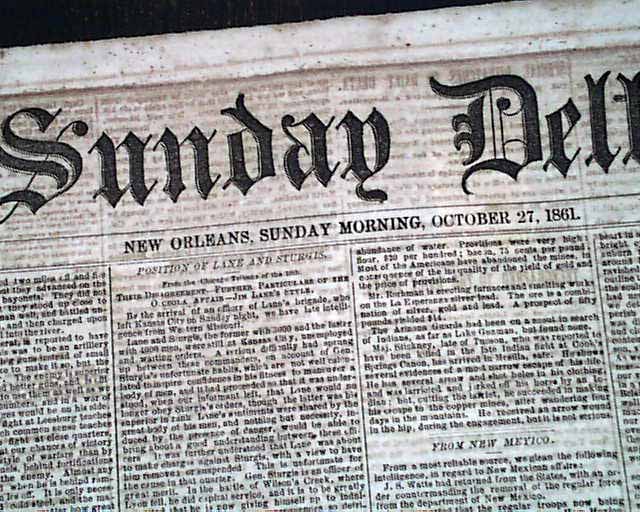 Among the front page items are: "Federal Evacuation of the Kanawha" "Floyd Marching for Kentucky" "From Arizona" "From New Mexico" "A Navy of Our Own" "Confederate Congress" & more. Inside includes: "From the Seat of War In Virginia" "Helping Ourselves" "Dispatches from Missouri to Northern Papers" "Seward's Last Joke" and more.
Truly Confederate newspapers from New Orleans are very difficult to find, as Admiral Farragut entered the mouth of the Mississippi in mid-April, 1862 and finally took New Orleans on April 28. Shortly thereafter Benjamin Butler moved in and took control of the city, it surrendering without a fight. So "Confederate" issues from New Orleans are limited to those published between Louisiana's secession from the Union on January 26, 1861 and the end of April, 1862, just a brief 15 month period.
Four pages, minor mend at the bottom, blank margin, very nice condition.