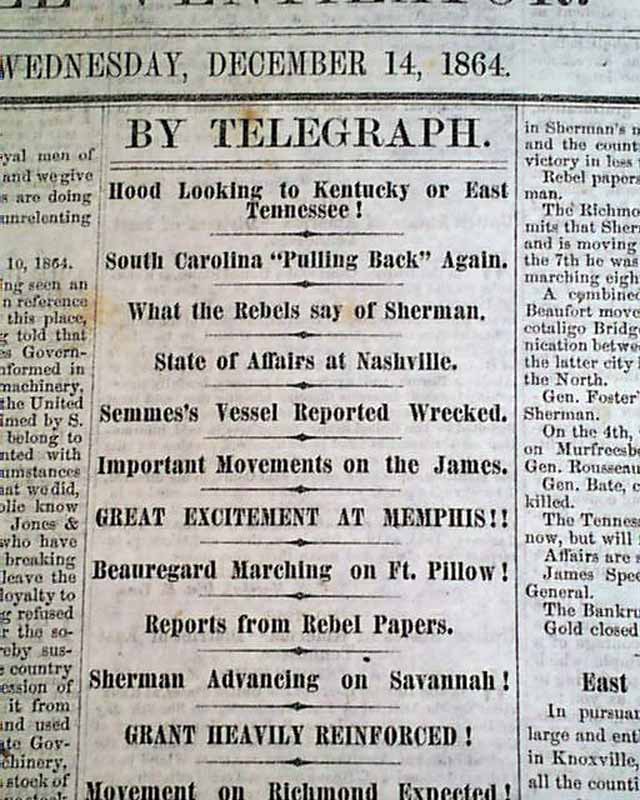 W. G. Brownlow, or  Parson Brownlow, was a fascinating personality to say the least. He regarded anyone who disagreed with him about religion or politics as an enemy. The circuit-riding Methodist parson turned to the press to spread his harsh anti-Presbyterian, anti-Calvinist rhetoric, and to spread his fervently held views on the inferiority of blacks & his unalterable opposition to secession. In 1861 Brownlow’s criticism of the Confederacy led the government to shut down his newspapers for 2 years. In December, 1861, Brownlow was arrested on a charge of high treason against the Confederacy. He spent much of 1862 touring the North giving pro-Union lectures & when he returned to Knoxville in 1863 the federal government provided him with a press, some type, $1500, & a government printing contract (credit Wikipedia).
His first issue under the title noted was dated Nov. 11, 1863 but after just 2 issues it would be suspended until January 9, 1864, and then it would only last until February, 1866.
This is a single sheet newspaper because of lack of newsprint. Near the top of the front page the editor explains: "Out of Paper" "We are compelled to appear in a half sheet this week, the operations of Hood having prevented our supply of paper. We have a fine lot on the route somewhere..." with more.
Among the many fascinating articles are: "Bold Lying by the Rebels" "Belligerent" "Flags of Truce--Tricks of the Rebels..." "Slaying Gen. Gillem Alive!" "Hood Looking to Kentucky or East Tennessee!" "South Carolina 'Pulling Back' Again" "What the Rebels say of Sherman" "Beauregard Marching on Ft. Pillow!" and much more.
Complete as a single sheet newspaper, a bit irregular at the blank spine, nice condition.
An opportunity for one of the more fascinating newspapers of the Civil War.