Home > Back to Search Results > Death & funeral of William Wrigley, in a Chicago newspaper...
Click image to enlarge 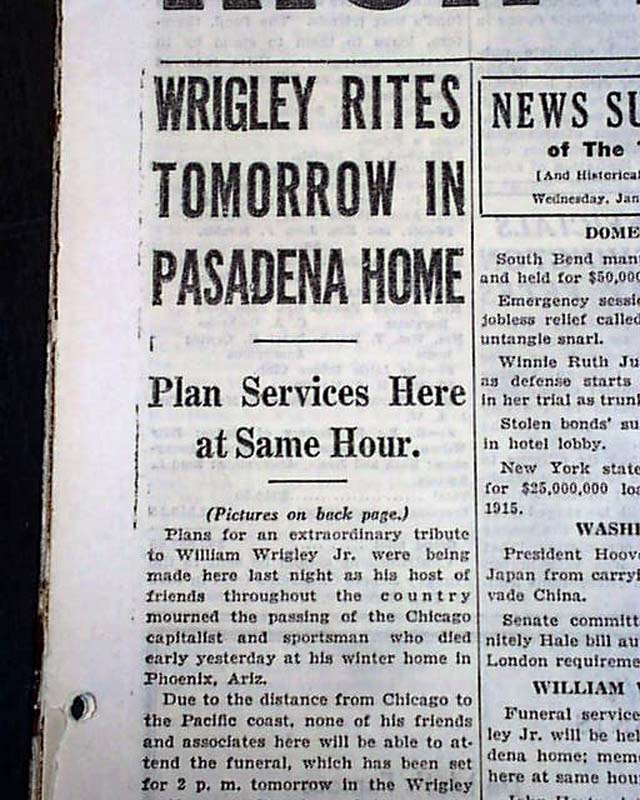 Death & funeral of William Wrigley, in a Chicago newspaper...

The front page first column has heads on the death and funeral of William Wrigley, the chewing gum industrialist, owner of the Chicago Cubs and for whom the Cubs field is named.
The Heads: "Wrigley Rites Tomorrow In Pasadena Home" "Plan Services Here at Same Hour". The article carries over to page 4 where are additional articles on him including: "Fortune of Wrigley Built with Coins of Many Lands" "Wrigley Maker Of History In Chicago Trade - Business Men Tell of His Acumen" "Story Of How Gum Became A Big Business - Chicle and Wrigley Rise in World Together".
The back page has part of a banner headline: "Wrigley Funeral to Be Held in Pasadena Tomorrow..." with 7 photos relating to him and his life (see).
Terrific to have this report in a Chicago newspaper given his rise to fame & prominence in the baseball world focused on Chicago.
Complete in 28 pages, this is the "rag edition" printed on very high quality newsprint meant for institutional holdings. In great condition as such, 4 small binding holes at the blank spine.