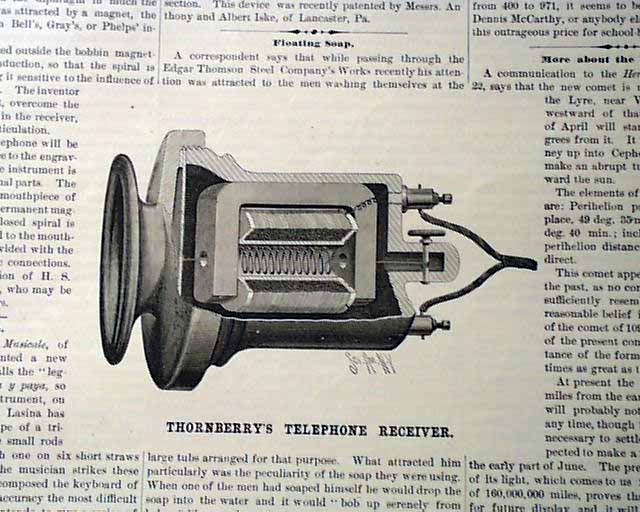 
SCIENTIFIC AMERICAN, New York City, April 1, 1882  Amongst the vast variety of inventions and mechanical improvements which are found throughout this issue--many of which are illustrated--is a  fascinating little article titled: "Floating Soap".
Portions of it include: "...the peculiarity of the soap they were using. When one of the men had soaped himself he would drop the soap into the water and it would 'bob up serenely from below' like a cork, ready for the next man to pick it up...The soap was called 'ivory', presumably on account of being of a creamy white color like ivory...We are pleased to note that Messrs. Proctor and Gamble, of Cincinnati, have at last discovered how to make a soap that will float & at the same time be durable & serviceable, & reasonably cheap." (see photos for the full text).  This issue has additional invention news and illustrations including the front page illustration headed: "Compound Tandem Engines Of Steamship Parisian" with related text, and an illustration and text related to "A New Fire Escape".
Sixteen pages, tiny binding holes at the blank spine, very good condition.