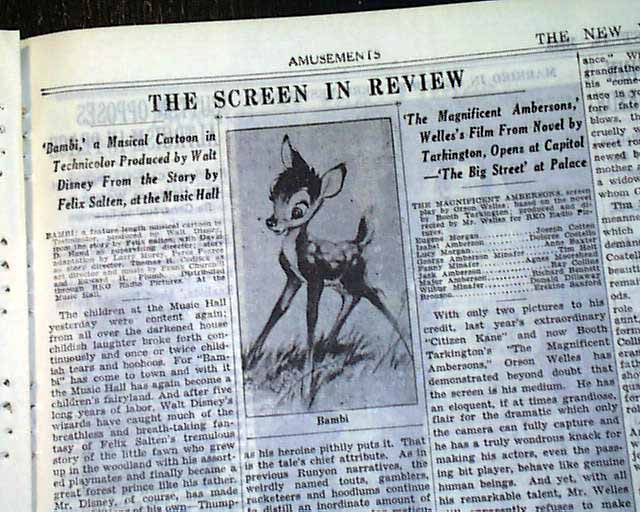 In the midst of World War II, page 13 contains a review of the world premiere of the latest Walt Disney feature-length animated film, "Bambi". Bambi was released to theaters by RKO Radio Pictures on August 13, 1942. The fifth animated feature in the Disney animated features library, the film is based on the 1923 book "Bambi, A Life in the Woods" by Austrian author Felix Salten.
The review is headed: " 'Bambi', a Musical Cartoon in Technicolor Produced by Walt Disney From the Story by Felix Salten, at the Music Hall"
The review begins: "The children at the Music Hall yesterday were content again; from all over the darkened house childish laughter broke forth continuously and once or twice childish tears and boohoos..." (see photos for portions). The review includes a one column photo of Bambi (see).
The same page includes an advertisement for the film playing at Radio City Music Hall (see).
Other news, sports and advertisements of the day. Complete in 34 pages, rag edition in nice condition.