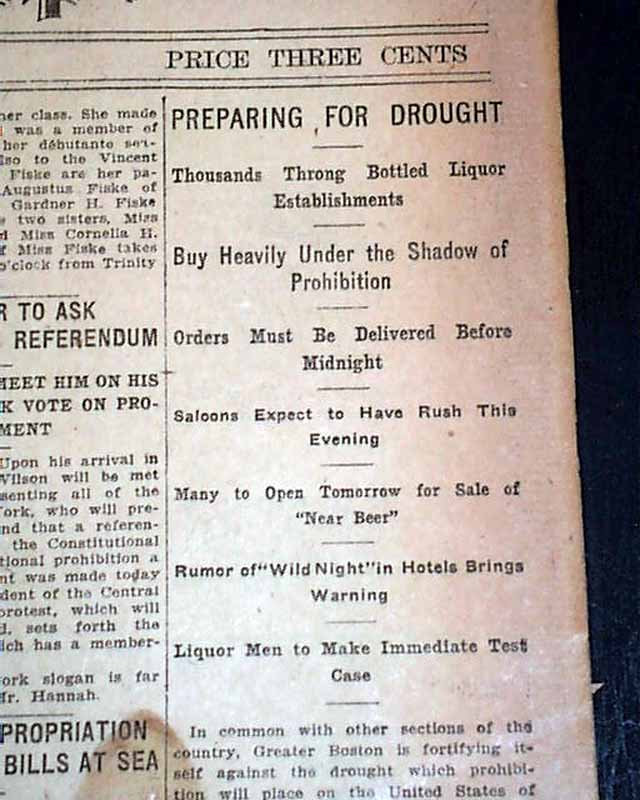 The ftpg. has a report concerning what essentially was an early Prohibition., as Massachusetts would go "dry" on July 1. Column heads including: "PREPARING FOR DROUGHT" "Thousands Throng Bottled Liquor Establishments" "Buy Heavily Under the Shadow of Prohibition" "Orders Must Be Delivered Before Midnight" "Saloons Expect to Have Rush This Evening" "Rumor of 'Wild Night' In Hotels Brings Warning" and more.
On November 18, 1918, prior to ratification of the Eighteenth Amendment, the U.S. Congress passed the temporary Wartime Prohibition Act, which banned the sale of alcoholic beverages having an alcohol content of greater than 1.28%. This act, which had been intended to save grain for the war effort, was passed after the armistice ending World War I was signed on November 11, 1918. The Wartime Prohibition Act took effect June 30, 1919, with July 1, 1919 becoming known as the "Thirsty-First".
Much more reporting on page 4. Complete in 20 pages, various chipping at the margins, evenly toned, somewhat fragile & should be handled carefully.