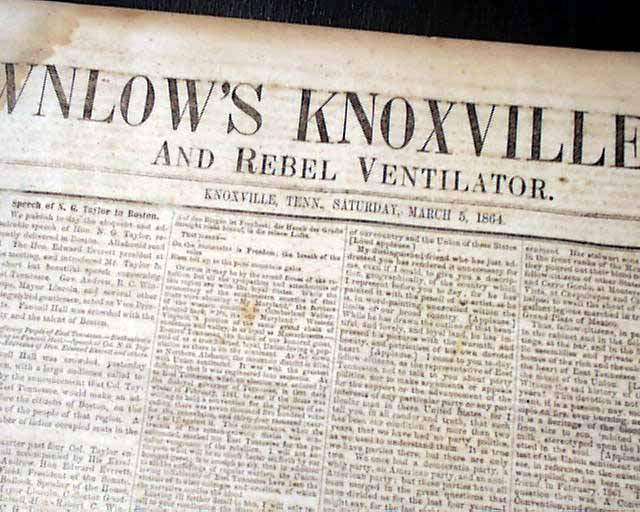 W. G. Brownlow, or  Parson Brownlow, was a fascinating personality to say the least. He regarded anyone who disagreed with him about religion or politics as an enemy. The circuit-riding Methodist parson turned to the press to spread his harsh anti-Presbyterian, anti-Calvinist rhetoric, and to spread his fervently held views on the inferiority of blacks & his unalterable opposition to secession. In 1861 Brownlow’s criticism of the Confederacy led the government to shut down his newspapers for 2 years. In December, 1861, Brownlow was arrested on a charge of high treason against the Confederacy. He spent much of 1862 touring the North giving pro-Union lectures & when he returned to Knoxville in 1863 the federal government provided him with a press, some type, $1500, & a government printing contract (credit Wikipedia).
His first issue under the title noted was dated Nov. 11, 1863 but after just 2 issues it would be suspended until January 9, 1864, and then it would only last until February, 1866. This is the volume 1, number 11 issue.
Among the great wealth of fascinating articles are: "Recent Death of Soldiers" "Late Southern News--Sherman's Movements in Mississippi" "The Rebel Mutiny in Fort Morgan" "Daring & Successful Raid into North Carolina" "Expedition into North Carolina" "The News" and so much more.
The back page has over half a column taken up with the: "Prospectus of Brownlow's Knoxville Whig and Rebel Ventilator". Complete in 4 pages, some damp staining near the margins, generally nice.
An opportunity for one of the more fascinating newspapers of the Civil War.

Re-nomination of Lincoln for the Pres...