Home > Back to Search Results > The legendary "called shot" home run by Babe Ruth, in a Chicago newspaper...
Click image to enlarge 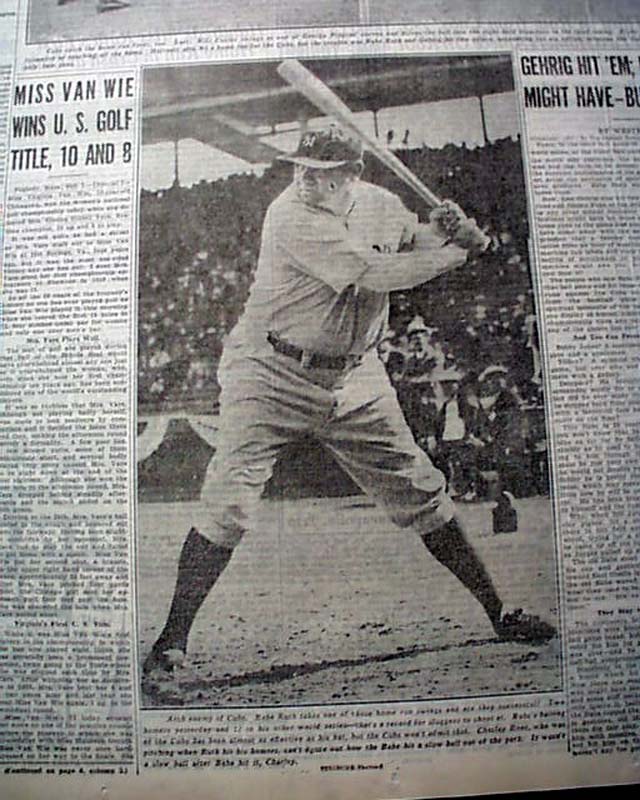 The legendary "called shot" home run by Babe Ruth, in a Chicago newspaper...

This could well be the most desired newspaper in baseball history. This edition reports the famous Babe Ruth "called shot" home run in the 1932 World Series.
As a bit of background, the following is on the Baseball Hall of Fame website:


"One of the most famous home runs in World Series history happened on Oct. 1, 1932 during Game 3 of the 1932 World Series. It was the New York Yankees vs. the Chicago Cubs, and the Yankees won the first 2 games at Yankee Stadium. Game 3 was at Wrigley Field in Chicago.
Charlie Root was the Cubs pitcher. He would give up a three-run homer to Babe Ruth in the first inning and a solo shot to Lou Gehrig in the third. The Cubs would score a run in the first, two in the third and another in the fourth. So after four innings the score was tied at 4-4.
In the top of the fifth inning, Joe Sewell led off for the Yankees and grounded out to short. Up next was “The Babe” – already a larger than life figure. As he stepped to the plate, the Cubs’ bench was riding him mercilessly. Babe would yell and gesture back. With the count 2 balls and two strikes, Ruth seemed to point two fingers toward center field. Then he belted the next pitch deep in the center field seats.
Gehrig would follow with a home run, giving each player two for the day. But it was Ruth’s second home run that would garner all the ink in the next day’s papers.
Ruth would confirm that he did call the home run. Charlie Root would say that he was giving two fingers to the crowd showing he had two strikes on him and still had one left.
Decades later, people still argue whether he was pointing or not. It will always remain in baseball folklore."

The first column of the front page is headed: "Home Runs By Ruth, Gehrig; Beat Cubs, 7-5" "Each Hits Two in 3d Yankee Victory". The full column reports the game, with the notable portion of the report having a subhead; "Ruth Breaks Tie" and a portion of the text including: "...That tie-breaking second homer of the Babe's probably will go down as one of the classics of baseball razzing. When Babe came up in the fifth the Cubs were feeling pretty pert...They scented victory on dear old Wrigley field...Yes, the Cubs were very peppery when Mr. Ruth went to bat with the score tied in the fifth. The Cub bench jockeys came out of the dugout to shout at Ruth. And Ruth shouted right back...More hollering and hissing and no small amount of persona abuse." Then another  subhead: "There It Goes!" and the text: "Ruth held up two fingers, indicating the two strikes in umpire fashion. Then he make a remark about spotting the Cubs those two strikes. Well, it seems that Charley Root threw another good one. Mr. Ruth smacked the ball right on the nose and it traveled ever so fast. You know that big flag pole just to the right of the scoreboard beyond center field? Well that's 436 feet from the home plate. Ruth's drive went past that flag pole and hit the box office at Waveland and Sheffield avenues. Ruth resumed his oratory the minute he threw down his bat. He bellowed every foot of the way..." with even more (see). The article continues in the sports section.

The sports section is terrific. It has its own masthead and dateline, and features a great banner headline: "ROOT SEES RUTH, GEHRIG RUIN  PERFECT PITCHES" plus a great wealth of subheads. Also four photos including a great full-figure photo of  Babe Ruth during a home run swing. And pages 2 and 3 in the sports section are terrific also including the two huge photos and a banner headline which spans both pages: "When Cubs Were Fighting In Vain against those Mauling Yankees In The Third Game Of The World Series At Wrigley Field"
But the notable report, on page 3 of  the sports section, has a subhead: "Babe Calls His  Shots" with the text including: "He missed a second home run in the third inning...but the masterpiece was only deferred. He hit it in the fifth, a ball that sailed incredibly to the extreme depth of center field...Guy Bush, the  Cubs'  pitcher, was up on top step of the dugout, jawing back at hi as he  took his  turn at bat this time...yelled raspingly at the great man to upset him. The Babe  laughed derisively and gestured at him, 'Wait, mugg; I' going to hit one out of the yard.' Root threw a strike  past hi and he held up a finger to Bush, whose ears flapped excitedly as he renewed his insults. Another strike passed him & Bush crawled almost out o the hole to extend his remarks. The Babe held up two fingers this time. Root wasted two galls and the Babe put up two fingers on his other  hand. Then, with a warning gesture of his and to Bush, he sent him the signal for  the customers to see. 'Now, it said, 'this is  the one. Look!' And that one went riding in the longest home  run ever hit in the park.
He licked the Chicago ball club but he left the people laughing when he said good-by; and it was a privilege to be  present because it is not likely that the scene will ever be repeated  in all its elements...Nor will you ever see an artist call his shot before hitting one of the longest drives ever made on the grounds, in a world series game, laughing and mocking the  enemy with two strikes gone."
I cannot say enough about the incredible wealth of reporting on this game in the sports section. Just too much to mention here, but the photos show much.
Keep in mind that it was in Chicago where this legendary event happened, and the reporting of the "called shot" is unlike that found in newspapers elsewhere.
The complete Sunday issue with all sections including, including the comics.  This is the "rag edition" printed on very high quality newsprint meant for the requirements of institutional holdings consequently in great condition. Four small binding holes at the blank spine.