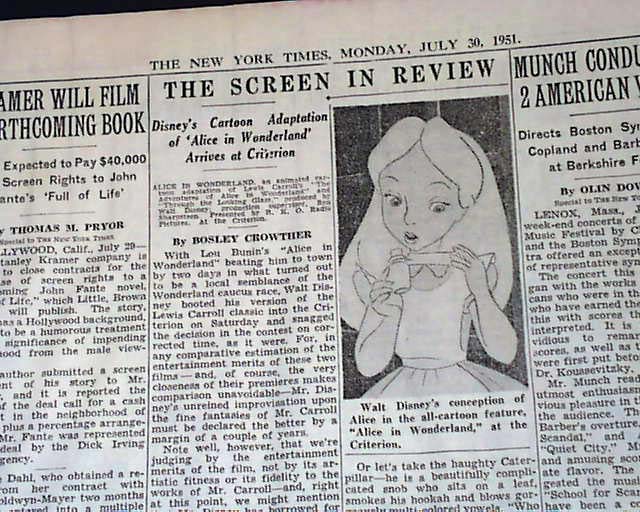 * Disney's animated movie "Alice in Wonderland" is introduced to the world

Page 12 of this newspaper contains the first review of the new animated movie from the Disney Studios, "Alice in Wonderland". See photos for entire text of the review.
The review includes a one column photo from the movie showing Alice. Also on the next page is an advertisement for the movie at the Criterion theater.
This is the complete 36 page newspaper, some light damp staining throughout, otherwise good.

wikipedia notes: Alice in Wonderland is a 1951 American animated comedy feature produced by Walt Disney and based on Lewis Carroll's Alice's Adventures in Wonderland and Through the Looking-Glass. Thirteenth in the Walt Disney Animated Classics series, the film was released in New York City and London on July 28, 1951 by RKO Radio Pictures. The film features the voices of Kathryn Beaumont as Alice (also voice of Wendy Darling in the later Disney feature film, Peter Pan) and Ed Wynn as the Mad Hatter. Made under the supervision of Walt Disney himself, this film and its animation are often regarded as some of the finest work in Disney studio history, despite the lackluster, even hostile, reviews it originally received, especially in the United Kingdom.