Home > Back to Search Results > A Chicago newspaper on the death of gangster John Dillinger...
Click image to enlarge 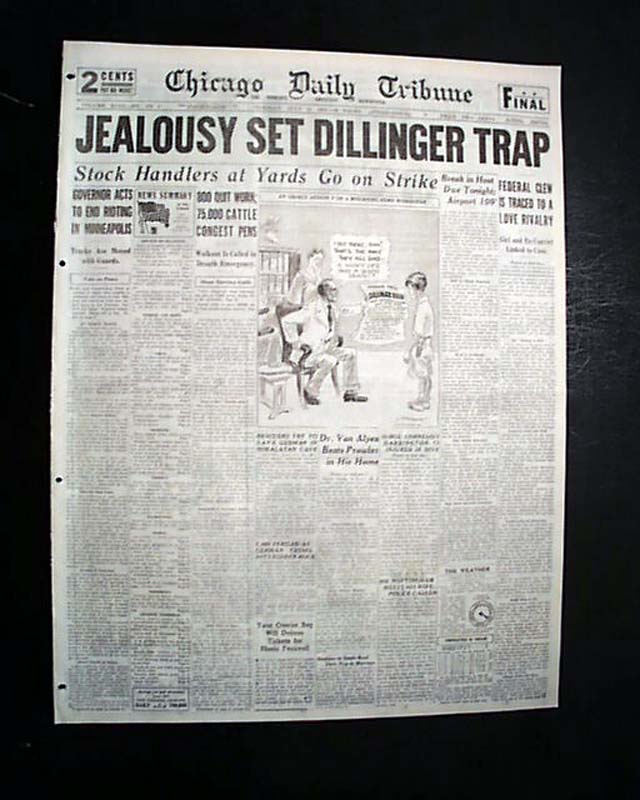 A Chicago newspaper on the death of gangster John Dillinger...

Simply a terrific issue if for no other reason than this is a report concerning the killing of outlaw John Dillinger in a Chicago newspaper--the city where it happened.
The bold banner headline proclaims: "JEALOUSY SET DILLINGER TRAP" with subheads: "Federal Clew Is Traced To A Love Rivalry" "Girl and Ex-Convict Linked to Case".
The article carries over to page 2 where also is found a wealth of additional articles including: "Throngs Fight For Glimpse Of Dead Dillinger" "Undertaker Refused Body Till Curious Get Fill" "Dillinger Dies Before Woman Who Knew Him" "Dillinger Used Nun's Disguise, Hoover Recalls" "Posed as Writer and Vault Salesman" "Notes Of Dillinger Inquest" "Jury Commands U.S. Agents For Killing Outlaw" "Throngs Attend Inquest Over Slain Gunman" "Dillinger Robbery Loot Since Parole Is Put at $300,000" "Dillinger Death Big News Of the Day In London" "Detroit Hunts Nelson, One of Dillinger Gang".
And on page 3 as well: "Dillinger's Dad Here To Claim; Body of Killer" "Drives In Old Hearse from Home in Indiana".
There is a terrific back page completely filled with photos, ten of which relate to the killing of John Dillinger.
In no other newspaper than one from Chicago would you find such a wealth of articles and photos relating to the death of John Dillinger. It was a local event, and as such was given considerable press.
This is the complete issue in 30 pages.  Great that this is the "rag edition", meaning it was printed on very high quality newsprint for institutional use, which required high quality stock for long term storage. As such the issue is in excellent condition, with 4 small binding holes at the blank spine.