Home > Back to Search Results > The historic Dred Scott case in a set of Washington, D.C. newspapers...
Click image to enlarge 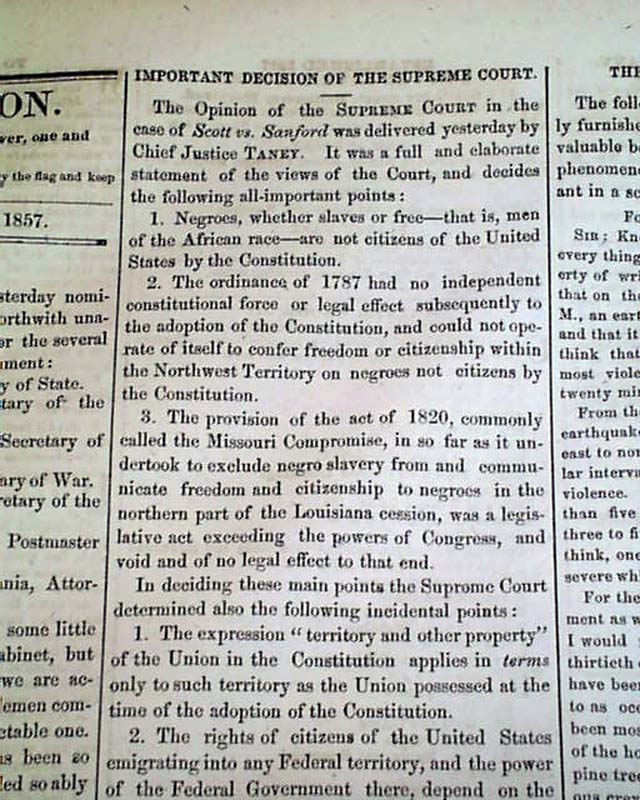 A terrific lot of 14 issues of the DAILY NATIONAL INTELLIGENCER, Washington, D.C., covering the historic 1857 Supreme Court decision of the Dred Scott case.
The March 7 issue contains at the top of page 3: "Important Decision Of The Supreme Court".  It begins: "Washington, March 6 -- The opinion of the Supreme Court in the Dred Scott case was delivered today by Chief Justice Taney. It was a full & elaborate statement of the views of the Court. They have decided the following all important points:..." followed by the four key points in their decision, including: "1st. Negroes, whether slaves or free...are not citizens of the United States by the Constitution...".
This is followed by the minority decision of Justice Nelson and Catron.
The March 9 issue contains at the top of page 3 a report headed: "Supreme Court" noting that Justices McLean & Curtis gave their opinions on Saturday.

Although the historic Dred Scott decision was handed down on March 6 and reported by most newspapers within a few days, those reports were just a brief summation of the lengthy rulings by the court, the most significant being that by Chief Justice Taney who wrote for the majority opinion.
Few if any newspapers of the day printed the complete text of Taney's opinion due to its extreme length, but perhaps logically this newspaper from Washington, which was the official "mouthpiece" of the government, does just that in the next three issues.
The May 29 issue has on page 3 an editorial headed: "The Supreme Court" which explains the delay in the printing of Taney's opinion: "...we seek to gratify the demands of such among our readers as naturally look to us for a report of the decision made in this celebrated case, and if we have hitherto delayed a compliance with their wishes it has only been because the opinions in question were not until a late day given to the public in an authentic form..." with much more on the decision, taking two-thirds of a column.
The actual report begins on page two issue under the head: "THE DRED SCOTT CASE--Supreme Court of the United States--The Official Report" & takes two-thirds of the page, carries over to take two-thirds of page 2 in the May 30 issue, and concludes by taking two-thirds of page 2 in the June 1 issue.
Near the conclusion Taney gets to the meat of the decision, as seen in the photos.
Unlike most other newspapers, this title would go on to print the full text of the opinions of the other eight Supreme Court Justices including the two dissenting opinions by Justices McLean and Curtis. The dates of these issues are: June 5 (Wayne, Grier, Nelson), June 10 (Daniel), June 11 (Campbell), June 13 (Catron), June 15 & 16 (McLean), June 18, 20 & 23 (Curtis).
A rare opportunity for a significant set of fourteen issues containing the announcement of the decision in a Washington newspaper the day after the announcement, and the full text of the opinions of all nine Justices.
Each of the 14 issues is complete in 4 pages, a bit of light damp staining to the bottom of the latter 3 dates, perhaps a bit irregular at the spine, generally very nice condition.