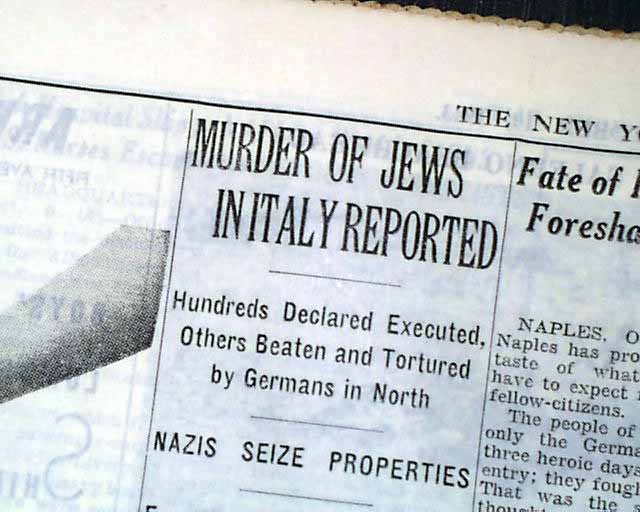 A report on page 35 gives evidence that the holocaust atrocities by the Germans against the Jews of Europe were known at least two years (some as early ass December, 1942) before the discovery of concentration camps in Germany in 1945.
The column headlines report: "MURDER OF JEWS IN ITALY REPORTED" "Hundreds Declared Executed, Others Beaten and Tortured by German in North" "Nazis Seize Properties" "Fascists Said to Have Pointed Out Victims--Rome Radio Warns All Italians". Some of the text includes: "...that German occupation troops in northern Italy had launched a terror campaign against the Jews & that hundreds of Jewish men and women had been executed with the utmost brutality...in addition to the executions, many had been beaten and tortured & had their property confiscated...".
The complete Sunday edition with over 100 pages. This is the "rag edition" printed on very high quality newsprint meant for institutional use. Great condition.