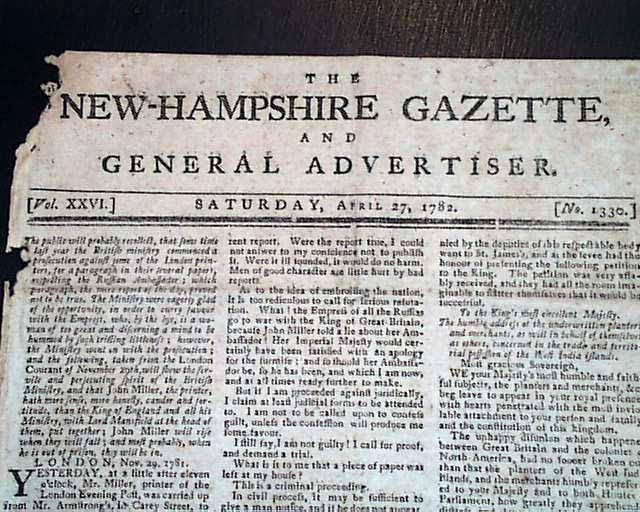 The front page includes an address: "To the King's Most Excellent Majesty" from the planters & merchants of England which includes: "...the unhappy disunion which happened between Great Britain and the colonies of North America had no sooner broken out...When the colonies of North America entered into an alliance with the ancient enemies of this kingdom, the fears of your petitioners considerably increased..." and more concerning the troubles in the West Indies islands.
Page 2 has an item from Philadelphia which includes: "The cruelties & depredations of the British army in the late travels of Lord Cornwallis through the Southern states have made the lukewarm violent, & timid resolute, in their opposition to royal government...My sentiments of the American cause from the stamp act downwards, have never changed: I am still of opinion that it is the cause of liberty & of human nature...". Other items mention: "...that  a number of troops were under orders to embark at a moment's warning, said to be on an expedition to Rhode Island. This seems to agree with a report circulating here (that) Gen. Washington has sent to Newport requesting (the) inhabitants to move their effects, etc. off the island..." with a bit more (some loss here: see)
A notable item on page 2 mentions: "Lord North has said, 'that the mode of carrying on the war internally upon the Continent of America, as practiced under Lord Cornwallis & other generals, is to be no longer followed, but that the form of the war is to be wholly changed...as the Minister has tried a piratical war--a war offensive--predatory--and decisive--a war of burning--a war of cruelty--he is at a loss to know what war his Lordship intends for the next campaign--unless it should be a war of humanity!"
Also a notable report from General Greene's headquarter near Charleston: "The great & gallant Gen. Green has had a series of success against the enemy, they are now effectually drove into Charlestown & have not a foot of ground out of that garrison; we now only wait the arrival of the French army...when we shall march down & open the trenches against the lines of Charlestown, & I make not the least doubt that by the month of April we shall be in full possession of that capitol. The enemy is much alarmed at our approach...". Also: "Gen. Wayne is now within 4 miles of Savannah having effectually drove the enemy into the garrison, they not occupying one post out of it."
Four pages, some loss at the spine causes the loss of some words, otherwise nice condition.