Home > Back to Search Results > From when New Orleans was in the Confederacy...
Click image to enlarge 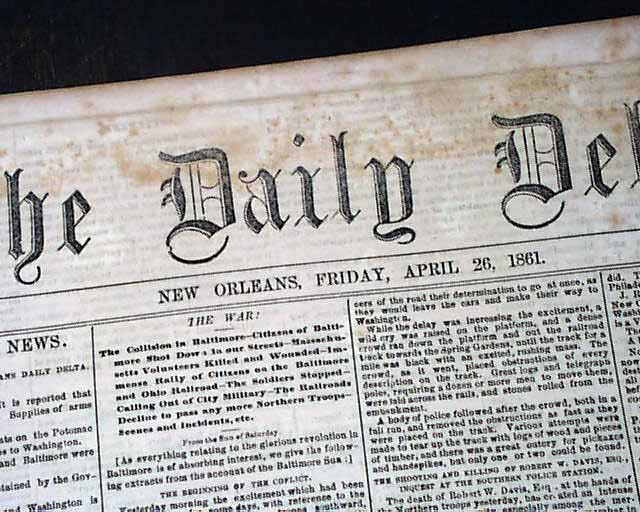 From when New Orleans was in the Confederacy...

Truly Confederate newspapers from New Orleans are very difficult to find, as Admiral Farragut entered the mouth of the Mississippi in mid-April, 1862 and finally took New Orleans on April 28. Shortly thereafter Benjamin Butler moved in and took control of the city, it surrendering without a fight. So "Confederate" issues from New Orleans are limited to those published between Louisiana's secession from the Union on January 26, 1861 and the end of April, 1862, just a brief 15 month period.
The front page includes: "The War" "The War At Norfolk" "Important From Texas - Indianola Taken by U.S. Troops - Cortina Crosses the Rio Grande".
Page 2 has a lengthy editorial: "Northern Conservatism" and then: "Telegraphic News" which has a lengthy list of Civil War dispatches from various theaters of war. The bkpg. includes: 'River Intelligence".
Four pages, nice condition.