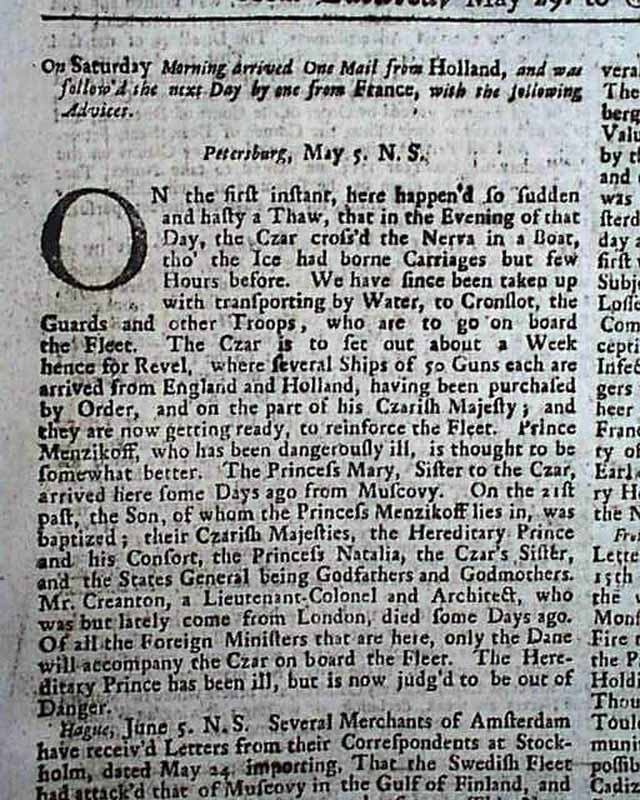 The front of the issue has a dateline Petersburg in which they were experienced such a sudden thaw that earlier in the day, they crossed the Nerva by carriages but by evening they crossed by boat.
From Hague, "...the Court was under a great Consternation, because that Prince is the only Male Child of the Czar's Family... That it was expected every Moment, that the Hereditary Prince's Consort would rejoice the Czar, by bringing a young Prince into the World. Mean while, her Reckoning being some time ago elaps'd...So that Time alone can determine which of these different Sentiments of the Physicians is the best grounded...".
An advertisement for a book entitled "Matrimony unmask'd; or, The Comforts and Discomforts of Marriage display'd." is on the back page.
A very displayable issue as the masthead features two wood engravings, on showing a man, or "post boy", on horseback trumpeting the news.
A single sheet issue with a red-inked tax stamp on the back page, measuring 8 1/2 x 14 1/4 inches and in very nice condition.