Home > Back to Search Results > University of Georgia integration in 1961...
Click image to enlarge 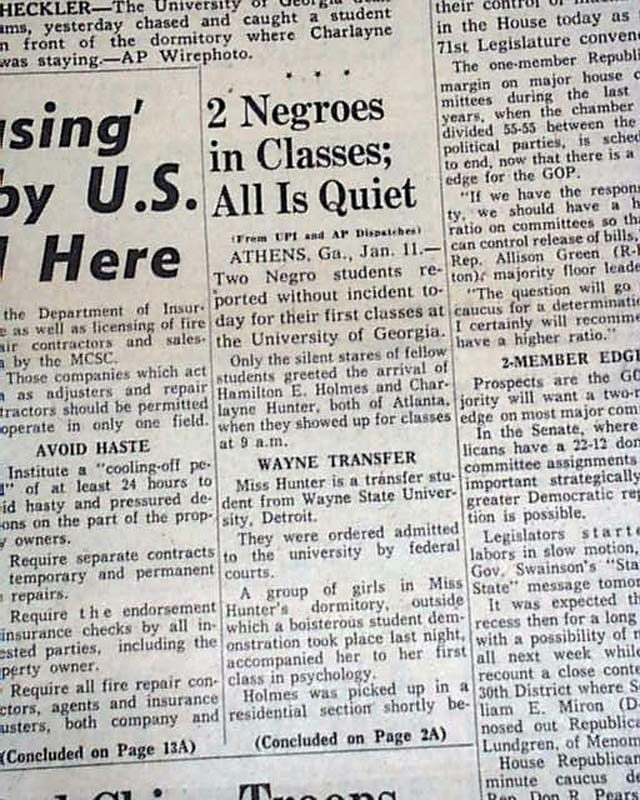 University of Georgia integration in 1961...

The front page has a one column heading: "2 Negroes in Classes; All is Quiet" with related photo. (see)
Other news of the day. Complete 1st section only with all 16 pages, some small binding holes along the spine, light toning at the margins, generally nice.

wikipedia notes: Hunter-Gault was born to US Army Chaplain Charles S.H. Hunter Jr., and Althea Ruth Brown in Due West, South Carolina. She spent most of her childhood in Covington, Georgia, and attended Henry McNeal Turner High School in Atlanta.

In 1961 Hunter-Gault and Hamilton E. Holmes were the first African-American students to attend the University of Georgia, ending racial segregation at that institution. Though Her dormitory, Myers Hall, would later became the center of racial riots early-on, she graduated from the University of Georgia in 1963 with a Bachelor of Arts in Journalism (BAJ) from the Henry W. Grady College of Journalism and Mass Communication.