Home > Back to Search Results > End of the Civil War... Funeral & more on Abraham Lincoln...
Click image to enlarge 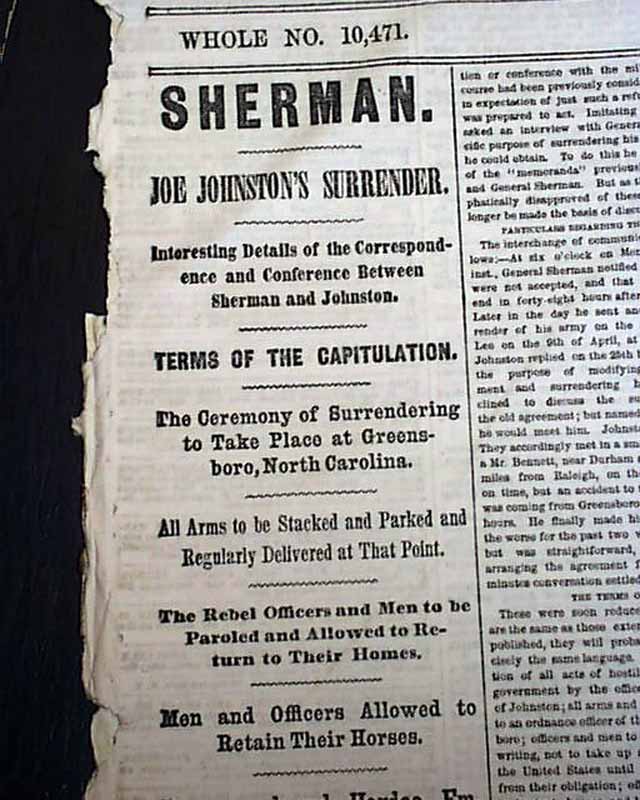 End of the Civil War... Funeral & more on Abraham Lincoln...

Two-thirds of the first column on the front page is taken up with great end-of-war heads including: "SHERMAN" "Joe Johnston's Surrender" "Terms of the Capitulation" "The Ceremony of Surrendering to Take Place at Greensboro, North Carolina" "Beauregard & Hardee Embraced in the Surrender" "Wade Hampton Reported Killed" and much, much more.
Also on the front page are: "The Assassins" "Astounding Revelations Forthcoming--Demand for the Surrender of Conspirators in Canada--John Wilkes Booth's Last Letter to His Mother--Circumstances of the Arrest of Junius Brutus Booth..." and more.
Page 5 has: "The Funeral Cortege" "The Reception at Columbus" "The Remains to Lie in State at Indianapolis, Indiana, To-day--The Room Where President Lincoln Died"" and "Our Late President" "Tribute of an Old Associate & Friend--Touching Instances of Mr. Lincoln's Character".
Eight pages,ftpg. foxing, irregular at the spine from disbinding, a few minor margin tears.