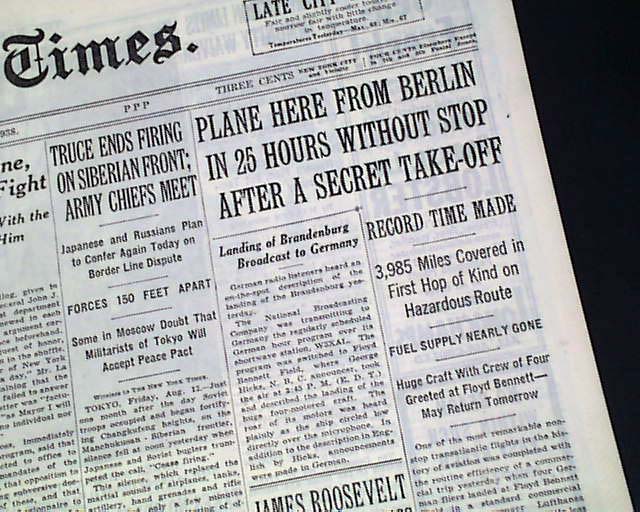 The top of the front page has a two column headline: "PLANE HERE FROM BERLIN IN 25 HOURS WITHOUT STOP AFTER A SECRET TAKE-OFF" with subheads. (see) Page 3 has a banner headline: "Another Chapter in Atlantic Flight History Is Provided by German Plane" with subheads and 3 related photo. Lengthy text here. Always nice to have notable events in history reported in this World famous publication.
Other news, sports and advertisements of the day. Complete with all 34 pages, rag edition in nice condition.

wikipedia notes: 10–11 August 1938: The first non-stop flight between Berlin and New York by a heavier-than-air aircraft was flown by a prototype four-engine airliner. Under the command of Deutsche Luft Hansa Kapitän Alfred Henke, Brandenburg, a Focke-Wulf Fw 200 S-1 Condor, D-ACON, departed Flugplatz Berlin-Staaken, 6 kilometers west of Spandau, at about 7:30 p.m., on Wednesday, 10 August 1938.