Home > Back to Search Results > Capture of Ethan Allen, and so much more...
Click image to enlarge 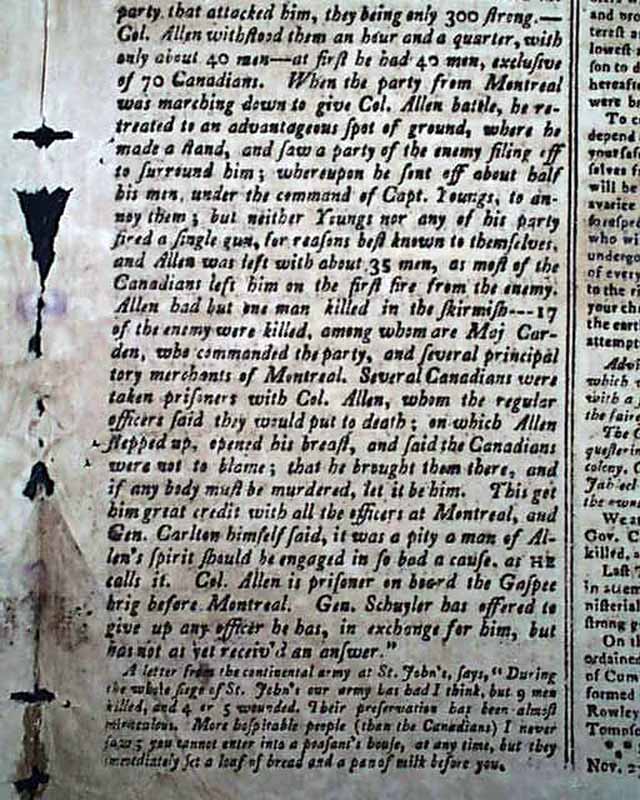 The front page has a bit noting: "...letter from General Burgoyne at Boston wherein he says that 20,000 men would be a feeble reinforcement to the army there, in their present situation." Page 2 has various tidbits relating to the war, a few including: "...that should the American war continue but for 3 years the very expense of the naval & military force necessary to complete the reduction of that continent will amount to at least ten millions sterling..." and: "...The plan proposed...with respect to America...the King's forces are to take Rhode Island..." with more on this very curious plan (see); also: "...It is said that as soon as Parliament meets a price will be set on the heads of the Generals Washington, Lee, and Putnam, in the rebel army. No less than nine different plans are now hanging about for a reconciliation with the colonies...".
Most of a column is headed: "To the Worthy Officers & Soldiers in the American Army" which begins: "Honour will crown every defender of Liberty..." with more great reading (see). Pg. 3 has a report headed: "The following are the Articles of Capitulation agreed upon at the Surrender of Chamblee" in Canada; also a report from General Montgomery of the taking of St. John's in Canada; Also a: "...letter from an officer of rank" which is a fine account of the capture of Col. Ethan Allen, beginning: "Col. Allen's misfortune happened by reason of his not being joined, as was agreed, by 400 men, which undoubtedly would have enabled him to have stood the party that attacked him...Col. Allen withstood them an hour & a quarter with only about 40 men...he retreated to an advantageous spot...where he made a stand..." with much more detail, & noting near the end: "...Col. Allen is prisoner on board the Gaspee brig before Montreal...".
Most of a column is taken up with an: "Address, from the General Officers...to the Soldiery of the Grand Continental Army" which has great content. This is followed by a report noting that: "...Col. Arnold...that he had entered the country of Canada & met with a friendly reception from the inhabitants..." and that an act has passed in Rhode Island sequestering the estates of Thomas Hutchinson & other "...avowed enemies of the liberties of America." Mention that Lord Cornwallis has offered his military services to his Majesty by joining troops destined for America. The back page has a lengthy letter from General Burgoyne in Boston.
Four pages, minor loss to the upper right corners, never-trimmed margins, various foxing & damp staining. 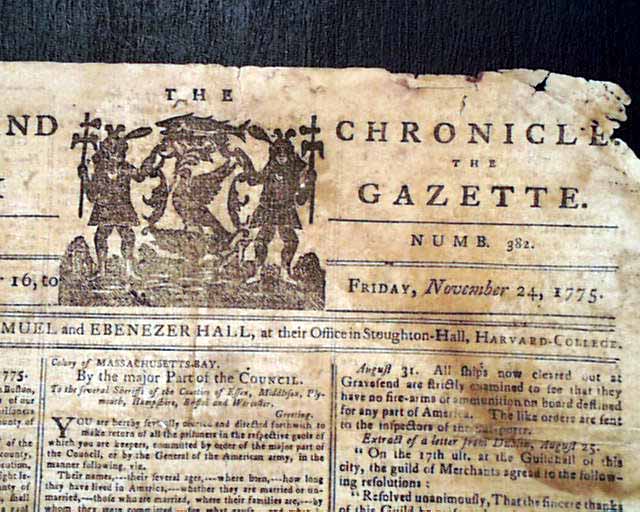 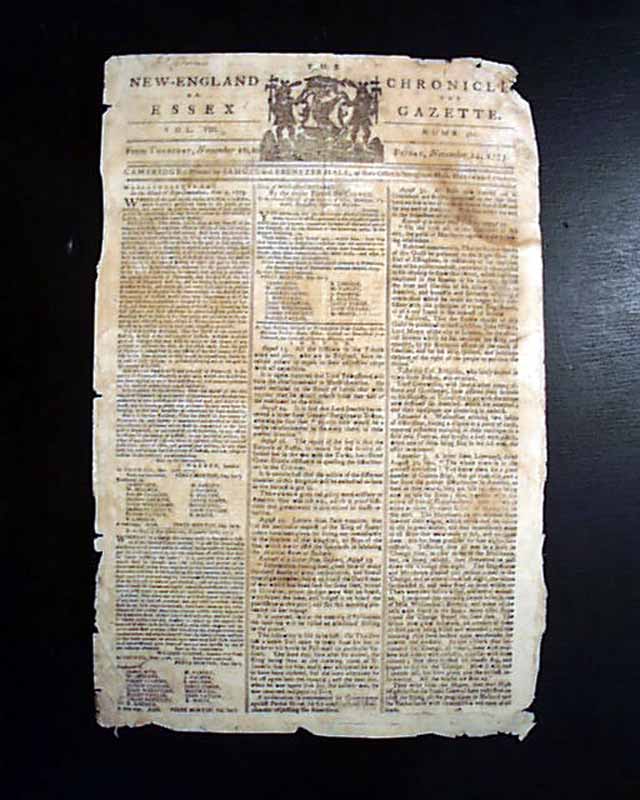 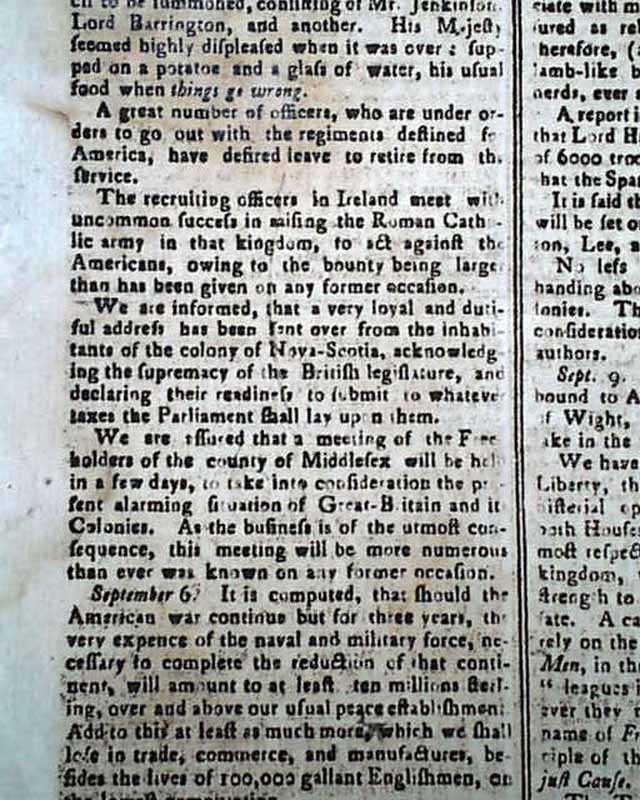 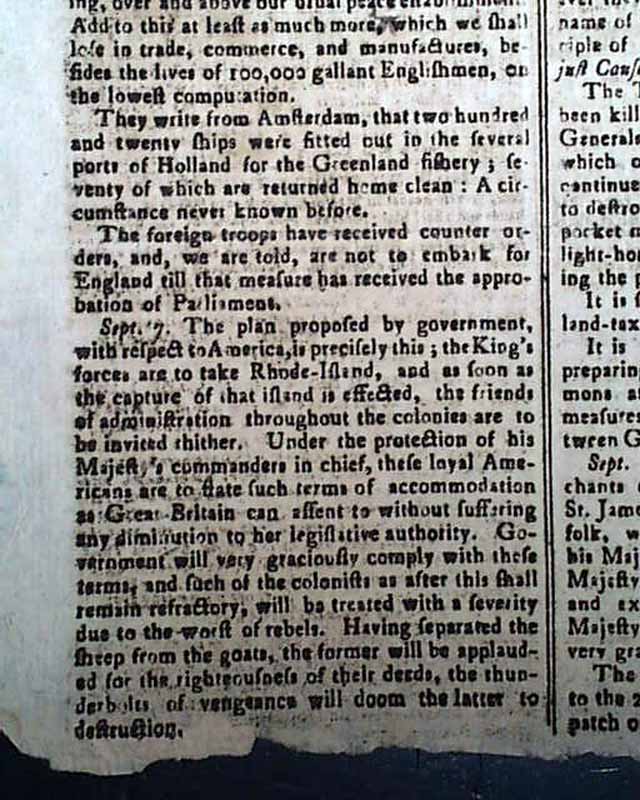 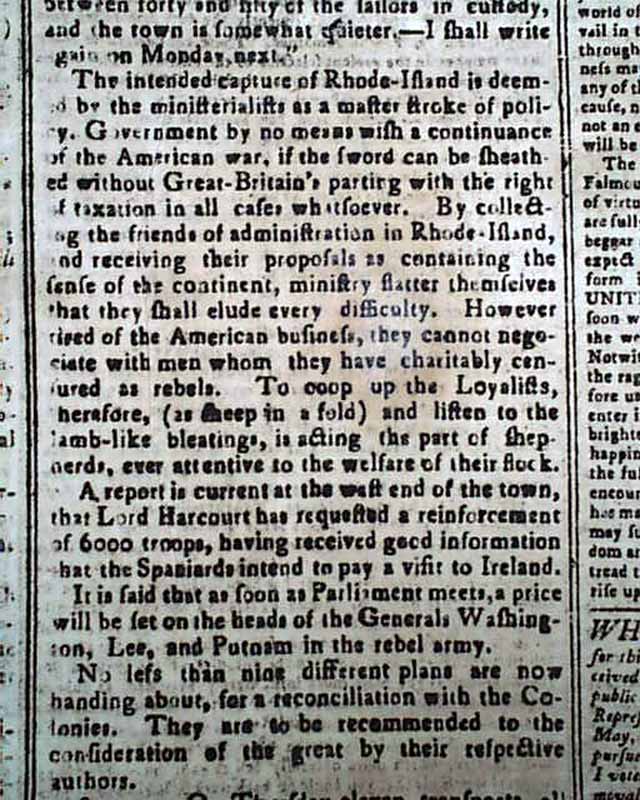 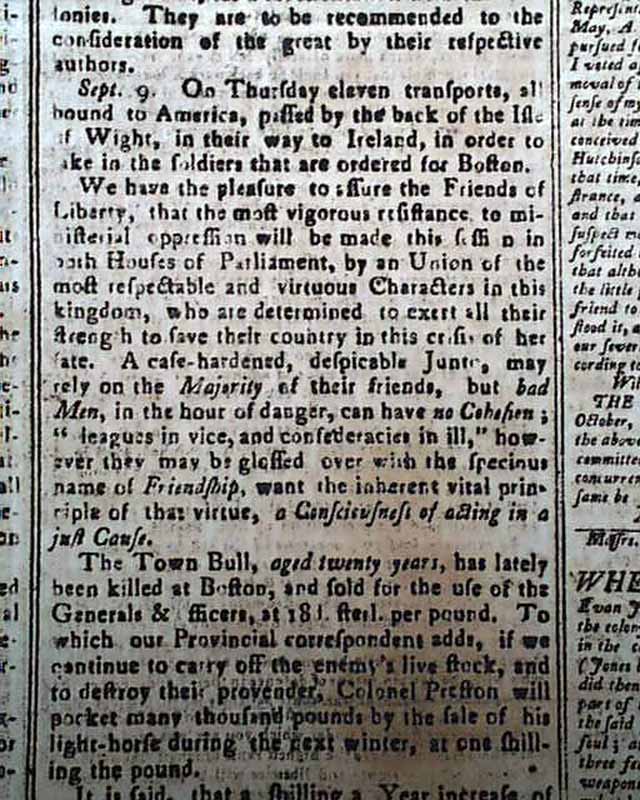 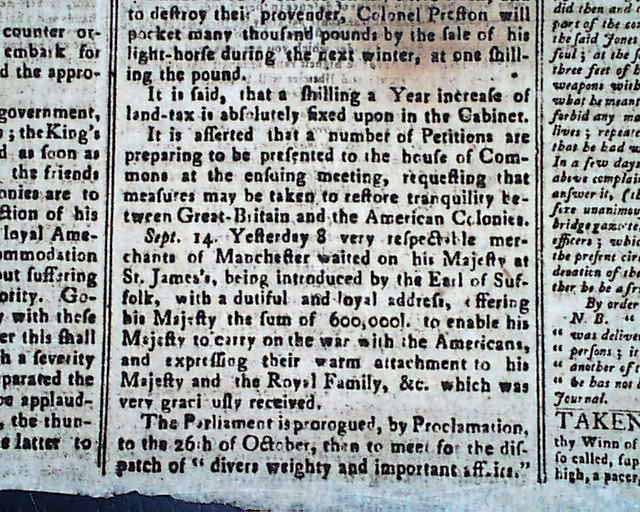 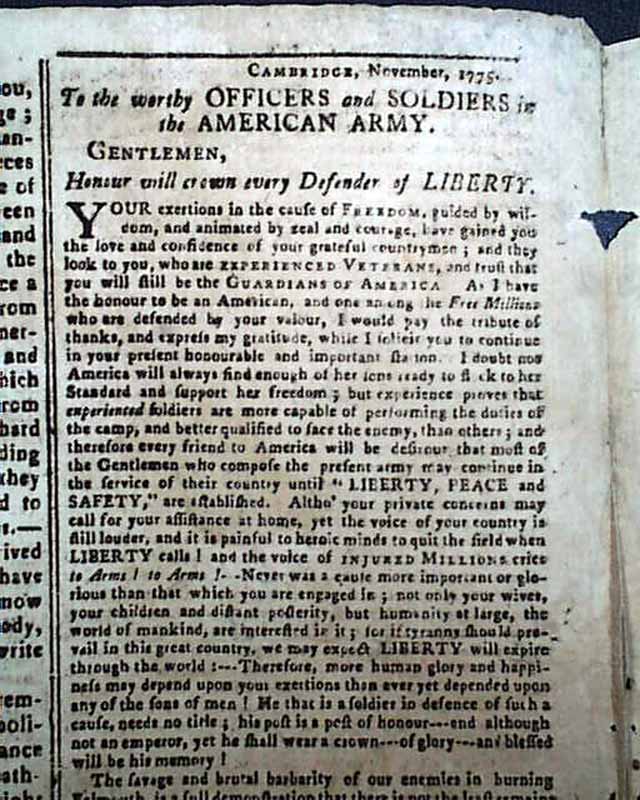 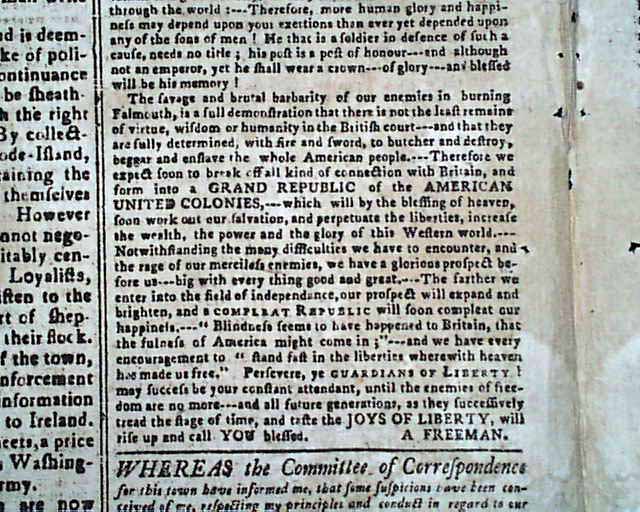 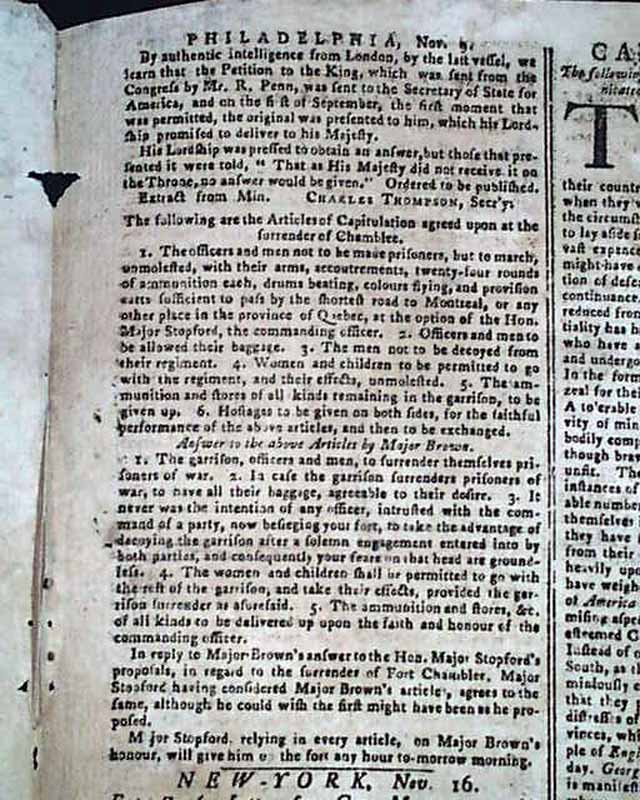 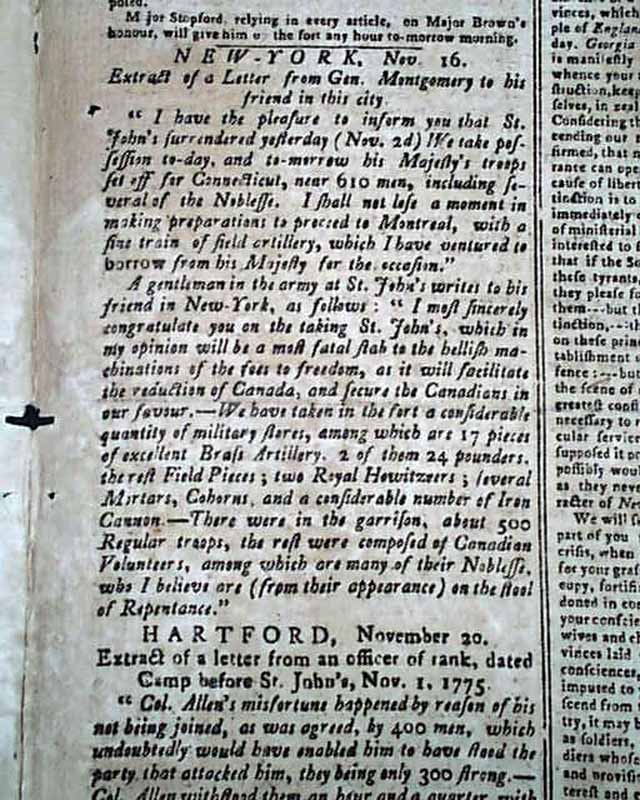 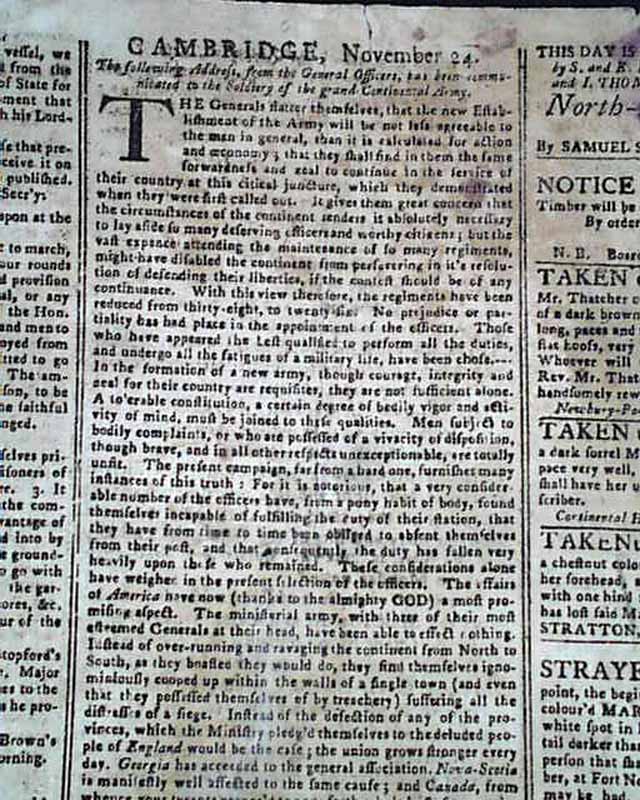 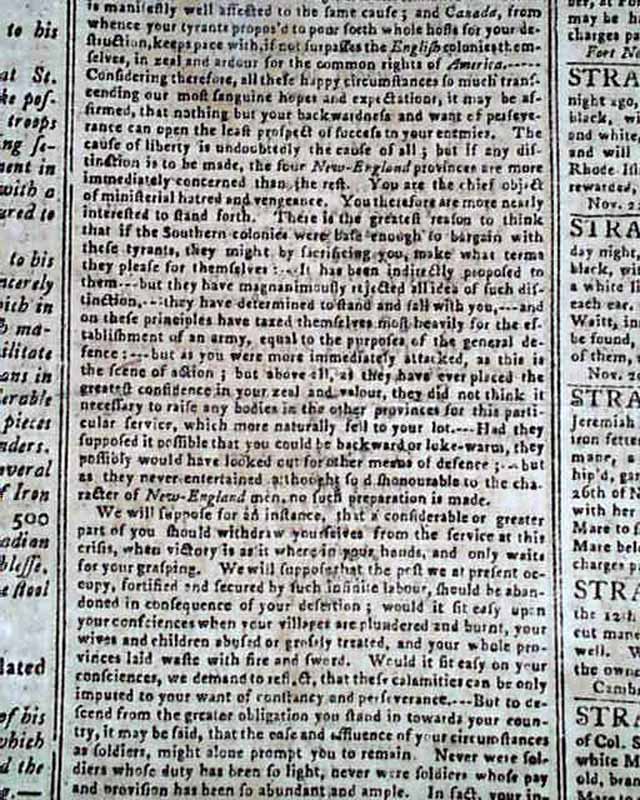 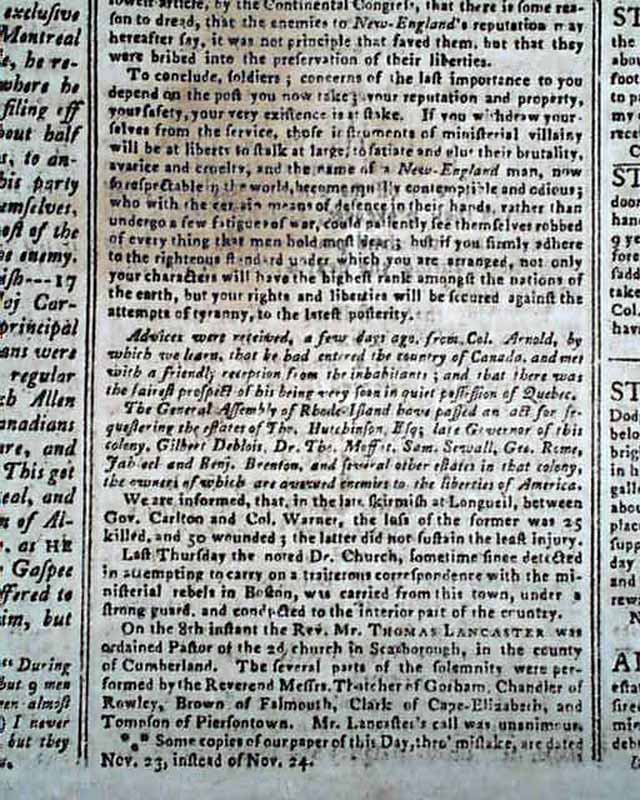