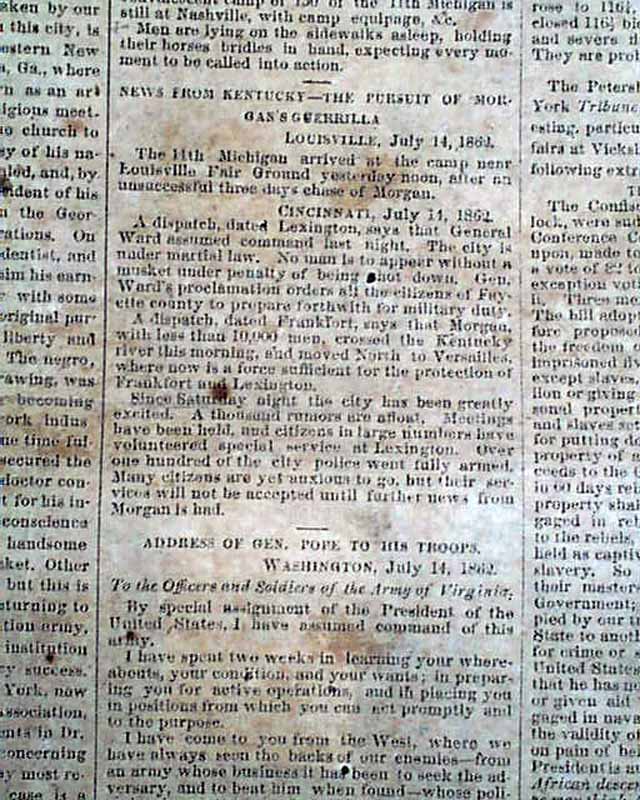 
DAILY DISPATCH, Richmond, Virginia, July 18, 1862  A very nice newspaper from the capital of the Confederacy. Among the front page items are: "From Vicksburg" "The Lines Beyond the Rappahannock" "Kentucky" "A Reminiscence" "The Yankees And the Negroes" "Through Connection to Staunton" "Latest From the North--Defeat of the Federals At Murfreesboro" "News From Kentucky--The Pursuit of Morgan's Guerrillas--Address of Gen. Pope to His Troops" "From Missouri--Effect of the News of M'Clellan's Retreat" "The Rebel Fortifications" and even more.
The back page has a nice editorial headed: "The Navy Not Dead" which includes: "When we had lost...our two greatest achievements to harbor defences--the Virginia or Merrimac...and the Mississippi at New Orleans--everybody seemed to despair of the navy of the Southern Confederacy...The enemy had the navy of the United States--(for which the South had paid two-thirds of the cost)..." with more (see). Also on the bkpg: "The Defeat of the Yankees At Murfreesboro" "Heavy Skirmish" "Curtis at Helena" and "From Vicksburg". The balance of the bkpg. is taken up with many ads & notices including headings for: "Runaways" "Deserters" "Negroes For Hire" and "Military Notices" among others.
Complete as a single sheet newspaper with a full masthead, scattered foxing, slightly irregular at the blank spine margins, very nice condition.