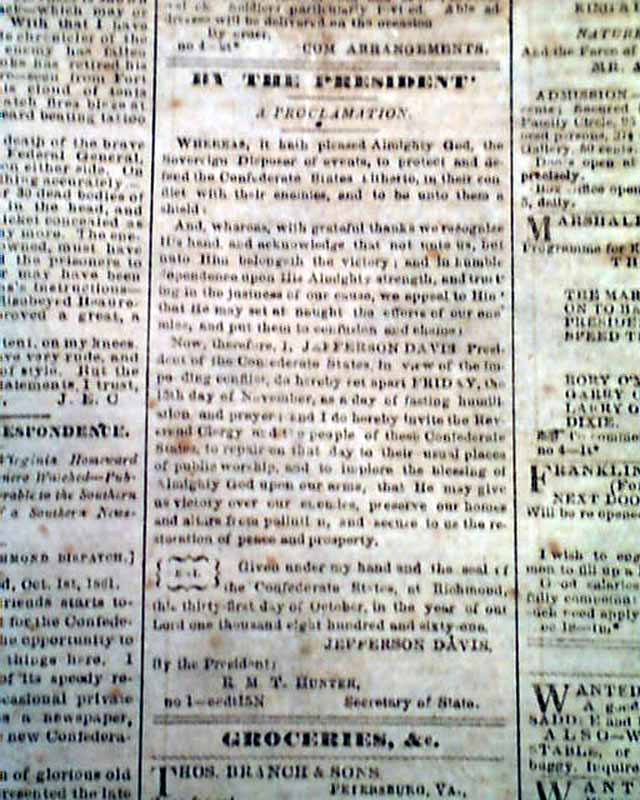 * From the capital of the Confederacy
* Jefferson Davis proclamation
* Battle of Leesburg, Virginia

The front page begins with an editorial headed: "War To Keep Off a Worse War" which offers some very interesting content on the longevity of the war. A few bits include: "...But neither Lincoln, nor Seward, nor Cameron, nor Chase, is a wise statesman or a disinterested patriot...They are all speculators, and look upon the war as a job...It is vain to hope that Lincoln or his party will ever make peace as long as they can carry on the war upon our territory..." and much more (see for portions).
Also on the ftpg: "From Kentucky and Missouri--Eagerness of McCulloch's Troops for a Fight--The Late Engagement of Gen. Jeff. Thompson--The Collision of Forces at Greenville" "A Yankee Scoundrel" "From Norfolk" "From Camp Centreville" "Articles for Sick Soldiers Solicited" and much more.
The inside pages have much on the Civil War as well, including: "By the President--A Proclamation" signed in type by: Jefferson Davis; "The Battle At Leesburg" with many subheads; "Late Northern News--Rumors in Washington--Confiscation of a Virginian's Property--The Mt. Vernon Estate..." "The Leesburg Fight" "Federal Reports from Missouri" "The Romney Affair" "The Great Naval Expedition" "Latest Southern News" "Reported Death of Sam. Houston" and even more.
Complete in four pages and in very nice, clean condition.