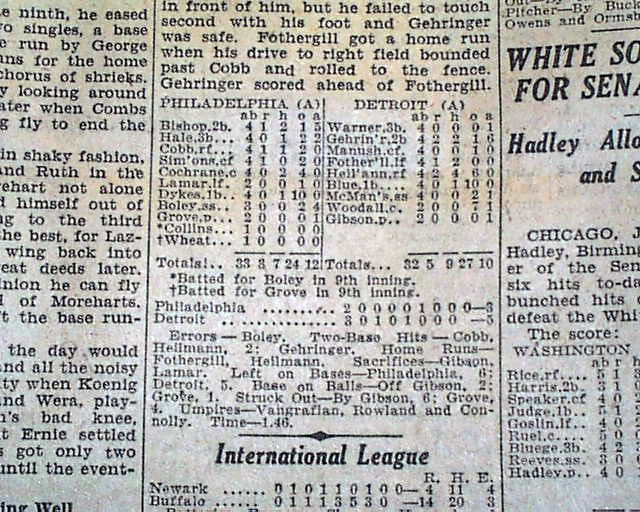 This 28 page newspaper has one column headlines on page 6: "GIBSON BESTS GROVE IN PITCHERS' BATTLE" and "Tigers Defeat Athletics, 5 to 3, Settling Issue in the First Inning" - both of which tell of the game between the Philadelphia Athletics and Detroit Tigers in which Ty Cobb had his 4,000th career hit. Unfortunately they did not mention this was his 4,000th hit. However, the Box Score shows he had a hit in the game.
The front page tells of the celebration of the homecoming of Richard E. Byrd and his crew.

wikipedia notes: Tyrus Raymond "Ty" Cobb (December 18, 1886 – July 17, 1961), nicknamed "The Georgia Peach," was a baseball player and is regarded by historians and journalists as the best player of the dead-ball era and as one of the greatest players of all time. Cobb also received the most votes of any player on the 1936 inaugural Hall of Fame Ballot, receiving 222 out of a possible 226 votes.

Cobb's legacy as an athlete has sometimes been overshadowed by his surly temperament and aggressive playing style, which was described by the Detroit Free Press as "daring to the point of dementia." During Cobb's playing days, numbers on uniforms had not been introduced yet, and so he is not identified with any particular number, as some other players are.