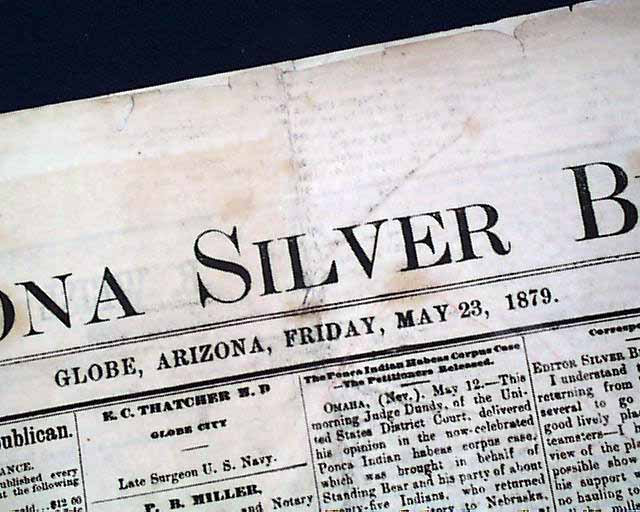 This is a volume 1 issue of a very rare newspaper, and very early from anywhere in Arizona let alone such a small mining town as Globe, located midway between Phoenix and the New Mexico border. Contains various news and ads of the day, with a front page item headed: "The Ponca Indian Habeas Corpus Case--The Petitions Released" and a front page letter to the editor which begins: "I understand that Hughes, after returning from Tombstone, advised several to go there that it was a good lively place for miners & teamsters..." with more (see).
The inside pages have an interesting variety of Old West tidbits, one reading: "...a drunken row occurred at Maricopa on Tues. evening in which Harry B. Jones shot a man named Baxter, one shot passing through his hand & another through his hat. Sheriff Gabriel arrested Jones & took him to Florence." There are plenty of ads as well, many with a Western theme.
Complete in 4 pages, never bound nor trimmed, wide margins, some minor loss at the spine margin & some margin tears, generally good.