Home > Back to Search Results > District of Columbia emancipated... Battle of Shiloh...
Click image to enlarge 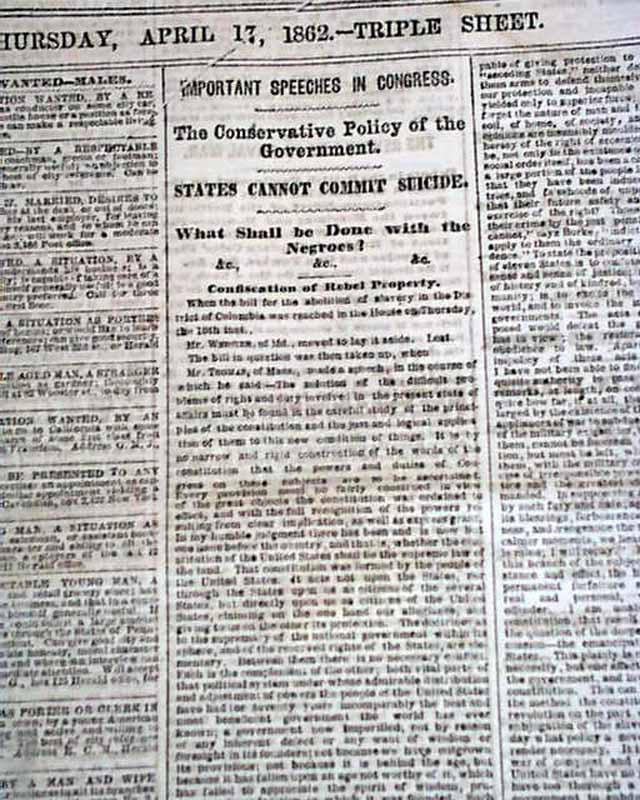 The most noteworthy content is found on page 10: "Important Message of the President to Congress" "Approval of the Bill Abolishing Slavery in the District of Columbia" "The Names & Antecedents of the Emancipation Commissioners" and more. The document is signed in  type: Abraham Lincoln.
This Act ended slavery in the nation's capital and compensated both former owners and freed slaves.
The front pag has considerable reporting from Congress debating the bill for abolishing slavery in the District of Columbia. It is followed by: "The President's Policy Explained" which carries over to page 2.
Additionally page 3 has nice reporting on the Battle of Shiloh, or Pittsburg Landing, with column heads:"The Battle of Pittsburg" "Official Reports of Major General Grant and General Sherman" "More Rebel Accounts" and: "The 'Battle of Shiloh' " "The Rebel Accounts of the Two Days' Fighting".
A wealth of other fine Civil War reports throughout. Twelve pages, very nice condition.