Home > Back to Search Results > James Madison's Address to the Agricultural Society of Albermarle...
Click image to enlarge 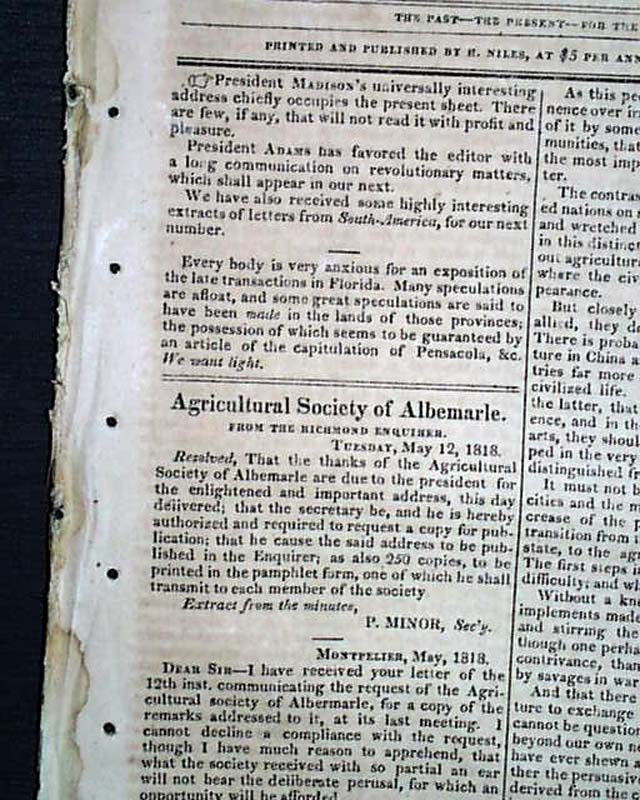 
NILES' WEEKLY REGISTER, Baltimore, July 18, 1818  Of importance is the multi-page printing of former President James Madison's Address to the Agricultural Society of Albermarle.
The Wiley Online Library, in regards to this lengthy address, states the following: "James Madison's 1818 Address to the Albemarle Agricultural Society offers new insight into the diverse historiography of agricultural reform in the American South. Madison described a planet with limited resources, accused Virginia farmers of wasting what little they had, and offered suggestions for ways to intensify cultivation. Many scholars have analyzed the southern agricultural reform crusade, but differ widely on whether it was successful, and the reasons why. Madison tried to balance high farming with southern independence. Southern farming could not imitate modern agriculture from England and the Northeastern states because of the region's ecological distinctiveness. Madison was reluctant to risk tested adaptations by importing to crops, animals, and fertilizers. Southern farmers reflected his ecological conservatism, and the movement for reform stalled. "
An inside page has an article regarding North Carolina, and yet another article focuses on "South American Affairs." Other news of the day is found throughout.
Sixteen pages, 6 by 9 3/4 inches, even toning, small binding holes along the left spine, otherwise in good condition.