Home > Back to Search Results > Sinking of the Lusitania: a pair of consecutive issues...
Click image to enlarge 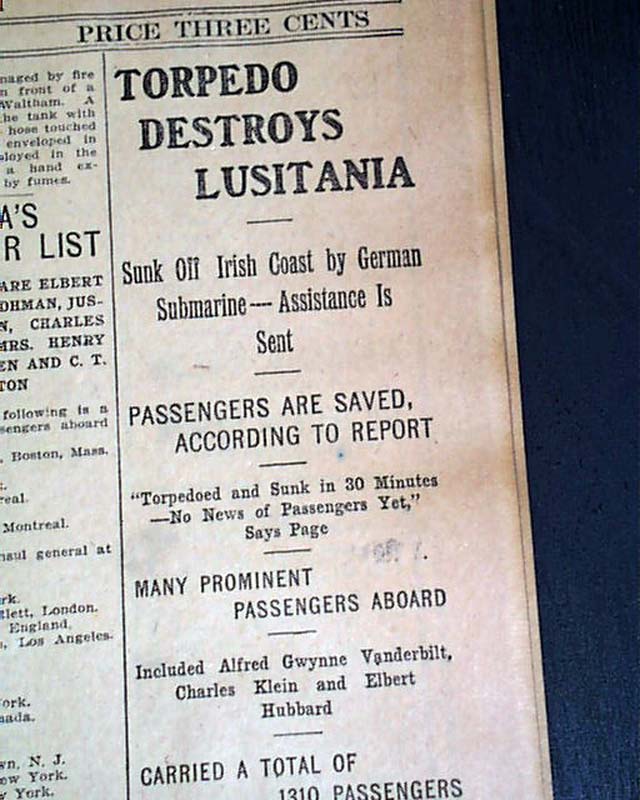 Sinking of the Lusitania: a pair of consecutive issues...


BOSTON EVENING TRANSCRIPT, May 7 and 8, 1915  Two consecutive issues reporting the sinking of the Lusitania.
May 7 issue: The last column of the ftpg. is mostly taken up with headlines on the event including: "TORPEDO DESTROYS LUSITANIA" "Sunk Off Irish Coast by German Submarine--Assistance Is Sent" "Passengers Are Saved, According To Report" "Many Prominent Passengers Aboard" and much more (see). Also on  the ftpg. is most of a column taken up with: "The Lusitania's Passenger List".
Page 3 has a banner headline: "Torpedoing of the Lusitania" as well as a large map headed: "Spot Where the Lusitania Was Torpedoed & Sunk By the Germans".
May 8 issue: Two of the ftpg. columns are headed: "1502 Lives Lost" under which is a huge stack of related heads; and: "Those Reported Saved" which includes a very lengthy list. Page 9 features a photo of the Lusitania headed: "The Lusitania On Almost The Exact Spot Where She Was Torpedoed". Pages 10 & 11 have banner headlines: "Torpedoing of the Lusitania By the Germans Called 'Murder' " and: "List of First & Second Class Cabin Passengers Who Sailed on Lusitania".
Each issue complete with all pages, various tears at the margins with some chipping of leaves at the top margin, generally nice. Very fragile & must be handled carefully.