Home > Back to Search Results > President Lincoln accepts the nomination for another four years...
Click image to enlarge 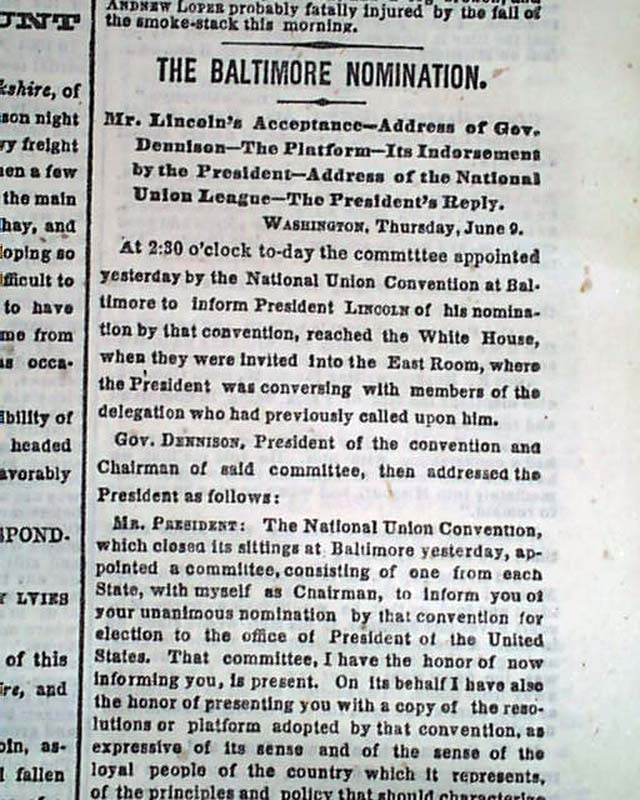 President Lincoln accepts the nomination for another four years...

The ftpg. has column heads: "The Baltimore Nomination" "Mr. Lincoln's Acceptance-Address of Gov. Dennison-The Platform-Its Indorsement by the President--Address of the National Union League--The President's Reply". This reports Lincoln being nominated for another term as President, noting in part: "...inform President Lincoln of his nomination by that convention, reached the White House..." with an address to him concerning it & followed by his response which begins: "Mr. Chairman & Gentlemen of the Committee: I will neither conceal my gratification, nor restrain the expression of my gratitude, that the Union people...have deemed me not unworthy to remain in my present position..." with much more.
Elsewhere on the ftpg. are column heads on the war including: "The Rebel" "Another Raid Of John Morgan" "Half a Dozen Towns in Their Possession" "THE ARMY OF THE POTOMAC" "Orders From Gen. Meade" and more.
Eight pages, some minor foxing, nice condition.