Home > Back to Search Results > Women's Air Derby... the first of its kind... Graf Zeppelin passes over Taunton - in a Taunton newspaper...
Click image to enlarge 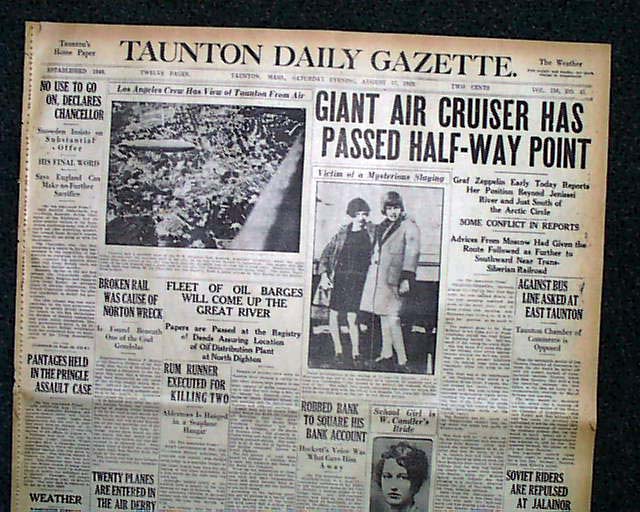 Graf Zeppelin passes over Taunton - in a Taunton newspaper...

* Graf Zeppelin's "around the world" flight - passes over Taunton, Massachusetts
* Reported in a Taunton newspaper - with aerial photo
* Women's Air Derby - the 1st ever "female only"

The front page has the two line, four column heading: "GIANT AIR CRUISER HAS PASSED HALF-WAY POINT," with subhead: "Graf Zeppelin Early Today Reports Hew Position Beyond Jenissei [Yenissei] River and Just South of the Arctic Circle." A front page photo shows an aerial photo of the Graf Zeppelin as it passed over the city of Taunton. Nice to have in a Taunton newspaper.
Three additional articles involving early flight are also present, including the front page articles: TWENTY PLANES ENTERED IN THE AIR DERBY," which tells of the *Santa Monica to Cleveland Woman's Air Derby (Amelia Earhart was a participant, however, the participants are not mentioned by name) - the very first "woman's only air derby, and "ARMY SURGEON SHOWS COURAGE IN AIR CRASH," and the page 11 article, "THEY WILL CRASH IN MIDAIR FOR $5000."
Other news of the day and period advertising is found throughout.
Complete in 12 pages, a slightly rough left spine, but overall quite ice. See images for details.

*Note (source: Wikipedia): Women's Air Derby was the first official women-only air race in the United States, taking place during the 1929 National Air Races. Humorist Will Rogers referred to it as the Powder Puff Derby, the name by which the race is most commonly known.