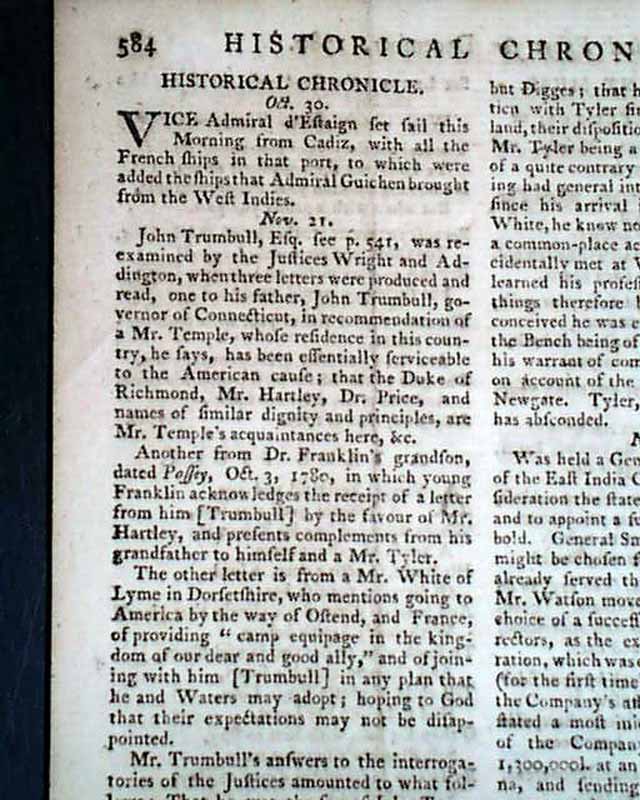 THE GENTLEMAN'S MAGAZINE London, December, 1780  The issue begins with 7 pages of "Proceedings in the Last Parliament" which includes discussion of the Revolutionary War in America.
Near the back in the "Historical Chronicle" is a lengthy items concerning John Trumbull, son of the governor of Connecticut, with some talk of Franklin's grandson, etc. Another report includes: "...thanks of this House be given to Sir Henry Clinton...& to Gen. Earl Cornwallis, for the eminent & important services rendered by them to his Majesty & this country against the rebels in America, particularly in the reduction of Charles-Town & the Glorious successes gained by the army under Cornwallis at the battle of Camden..." with more, including an issue concerning: "...Lord North defended Lord Cornwallis. He said the protest alluded to was only against the rights of taxation; whereas the contest now is for the sovereignty of this country over America...".
Another report includes: "That Major-Gen. Leslie was seen entering the Chesapeak on the 18th...with orders to act under Lord Cornwallis & would consequently interrupt Mr. Gate's communication with Virginia...some dispatches lately intercepted in a rebel mail; that Washington still remained at or near Tappan, that he had not yet dispatched a single man to Gates, who cannot, according to Arnold's account, have above 800 continental troops with him..." (see). There is also reference to the Major Andre/Benedict Arnold treason with: "...intercepted letters...are...signed by seven of the general officers who sat on the trial of Adjutant-Gen. Andre. There is, say they, no ground of hope that the enemy will relinquish their hope till they find the country prepared to defend itself...". The reports from the intercepted letters carry over to the following pages.
Included is the fold-out plate of characters in a Roman tragedy, called for in the title/contents page.
Complete in 48 pages, 5 by 8 inches, full title/contents page with an engraving of St. John's Gate, in very nice and clean condition.