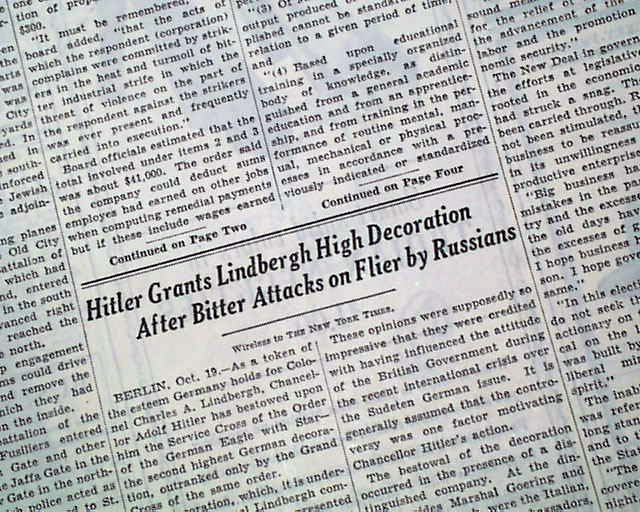 Near the bottom of the front page is a two column heading: "Hitler Grants Lindbergh High Decoration After Bitter Attacks on Flier by Russians" (see) First report coverage on Hermann Goering presenting Charles Lindbergh with the Service Cross of the German Eagle. Always nice to have notable events in history reported in this World famous publication.
Other news, sports and advertisements of the day. Complete with all 48 pages, rag edition in nice condition.

source: A Nazi Sympathizer: In 1936, Lindbergh was asked “to report on the state of Germany’s military aviation program” (“Fallen Hero”). He continued to visit Germany over the next few years and in 1938 was planning to move his family to Berlin (“Fallen Hero”). In October 1938, Lindbergh received the Service Cross of the German Eagle “for his contributions to aviation” (“Fallen Hero”). Even though Lindbergh only saw it as just another medal, many people saw an acceptance of the ideals of the Nazi party (“Fallen Hero”). About a month later, after the Nazi’s “brutal assault on Jews that came to be known as Kristallnacht” occurred, the Lindberghs cancelled the move to Berlin and returned to the United States in April of 1939 (“Fallen Hero”).