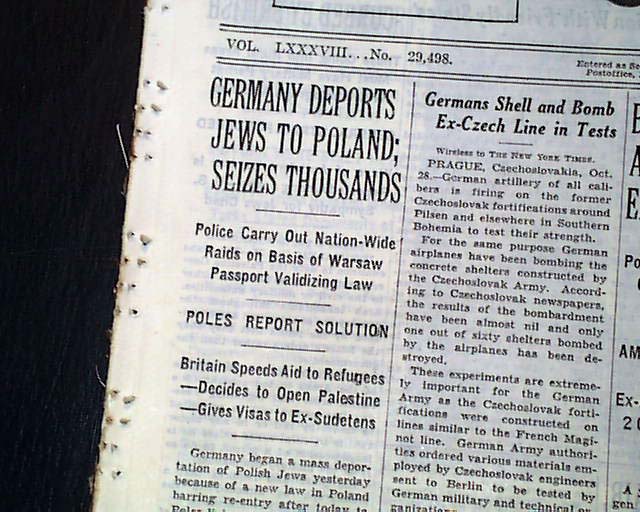 The top of the front page has a one column heading: "GERMANY DEPORTS JEWS TO POLAND; SEIZES THOUSANDS" with subheads. (see) Always nice to have notable events in history reported in this World famous publication. 1938 was a very tumultuous time in Germany with the persecution of Jews growing worse and worse.
Other news, sports and advertisements of the day. Complete with all 36 pages, rag edition in nice condition.

wikipedia notes: The Polenaktion, or "Polish Action," refers to the arrests and expulsion of approximately 17,000 Polish Jews living within the German Reich in October 1938. These deportations, ordered by SS officer and head of the Gestapo Reinhard Heydrich, displaced thousands of Polish Jews along the Germany-Poland border. From October 27 until October 29, the day before the Polish decree regarding the eligibility of passports was set to take effect, state authorities in Germany arrested approximately 17,000 Polish Jews and cancelled their German permits of residence. The Gestapo was easily able to locate those arrested through registration data and census files.