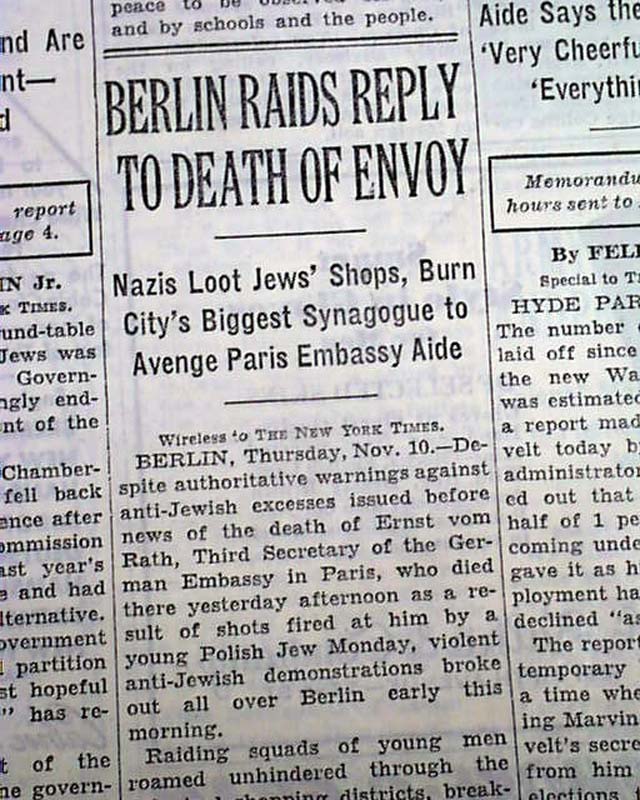 On the eve of Armistice Day, Kate Smith sings Irving Berlin's God Bless America for the first time on her weekly radio show while the papers report the news of what was to become known as Kristallnacht, the "night of broken glass".  Nazi troops and sympathizers loot and burn Jewish businesses - the beginning of the horrific Holocaust.
This issue contains on the front page the first report on this infamous event with a one column heading: "Berlin Raids Reply To Death Of Envoy" & subhead: "Nazi's Loot Jews' Shops, Burn City's Biggest Synogogue to Avenge Paris Embassy Aide". This report takes most of a column and carries over to page ten. Always nice to have notable events in history reported in this World famous publication.
Other news, sports and advertisements of the day. Complete in 56 pages, this is the rare rag edition that was produced on very high quality newsprint, with a high percentage of cotton & linen content, allowing the issues to remain very white & sturdy into the present. Given the subscription cost, libraries & institutions rather than individuals were the primary subscribers of these high-quality editions. Very nice condition.