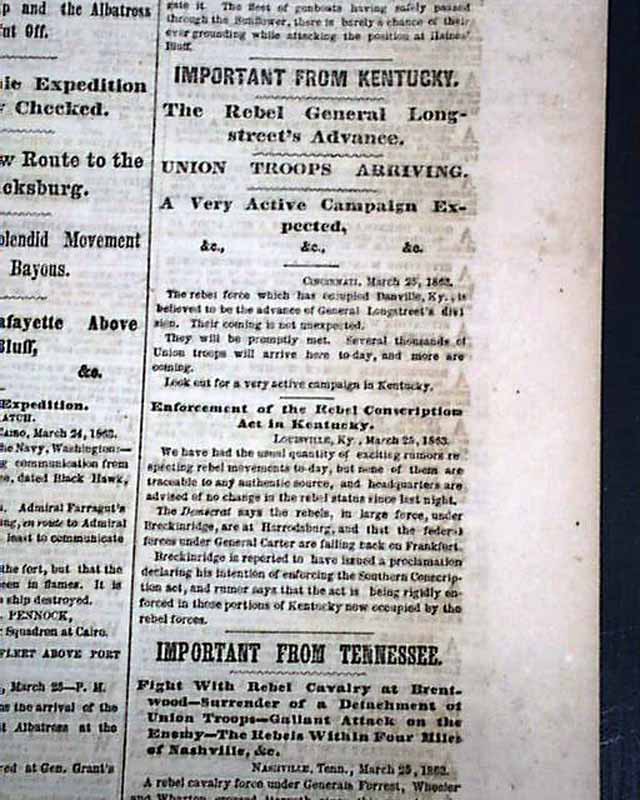 This issue has a report quite inconspicuous in its presentation yet exceedingly significant in its place in history. It reports the very first recipients of perhaps the most prestigious & coveted award for military valor: the Medal of Honor.
Page 4 has a one column heading: "Private Soldiers Rewarded For Meritorious Service" which includes the background of the honored soldiers & mentions in part: "...six of the number arrived in Washington...had an interesting interview with...the Secretary of War...The Secretary presented each of them a medal such as was authorized by the late Congress for meritorious conduct, these being the first bestowals of that character...They afterwards had an interview with the President at the Executive mansion." with other details as well (see).
The six soldiers participated in the famous Great Locomotive Chase of the prior year. Jacob Parrott was the first first of the six to receive the Medal.
The [Congressional] Medal of Honor award was officially instituted in March of 1863 (similar awards were previously given by several branches of the military on an informal basis), making these soldiers the first to receive the award.
Much of the front page has column heads on the Civil War and includes a nice war map headed: "The New Yazoo Expedition" but such content pales in comparison to the significance to the Congressional Medal of Honor report.
Eight pages, nice condition.