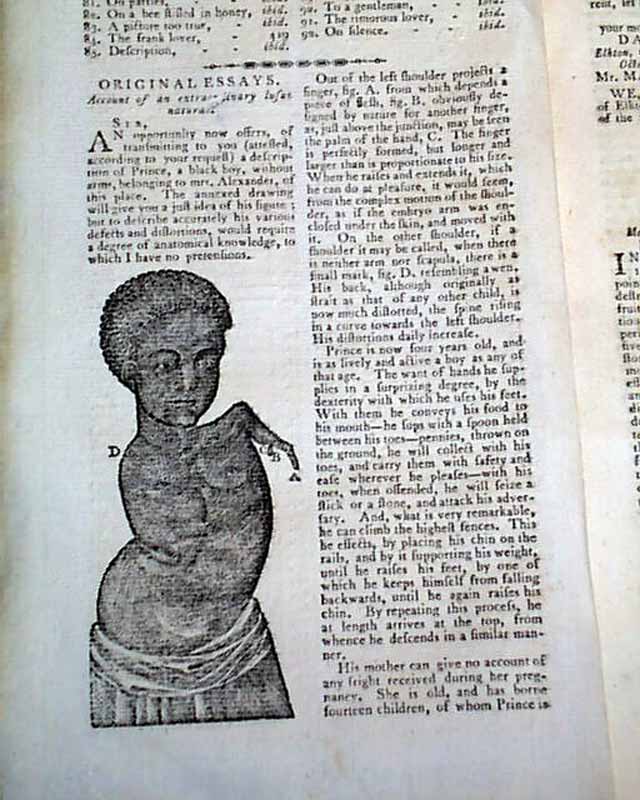 THE AMERICAN MUSEUM, Philadelphia, November, 1789  This was one of the more successful titles.
Among the many articles noted on the full title/contents page are an article with a rare illustration (seldom found in 18th century American magazines) of: "...a black boy without arms belonging to Mrs. Alexander..."; "Creoles of St. Domingo" "The Ancient Welsh" "Oration in Praise of Drunkenness" "Address of...the Presbyterian Church...to the President of the United States" which is followed by his "Answer" signed in type: G. Washington.  "Education of Negro Children" and "An Address...from the Penna. Society for Promoting the Abolition of Slavery & the Relief of Free Negroes Unlawfully held in Bondage" which is signed in type by: B. Franklin, President.
Near the back is: "Foreign Intelligence" with news from the French Revolution, plus "American Intelligence" which includes news items from Lexington, Kentucky; Charleston, Augusta, Georgia; Newburyport (arrival of the President on his tour), Portsmouth, N.H. (also arrival of the President on his tour); New York, Albany, Petersburg, Va.; & Philadelphia. Reports include trouble with Indians, discussion of the new Constitution and Amendments to it, other political events and more.
Complete in 80 pages, 5 1/2 by 8 3/4 inches, never-trimmed margins (desired), nice condition.