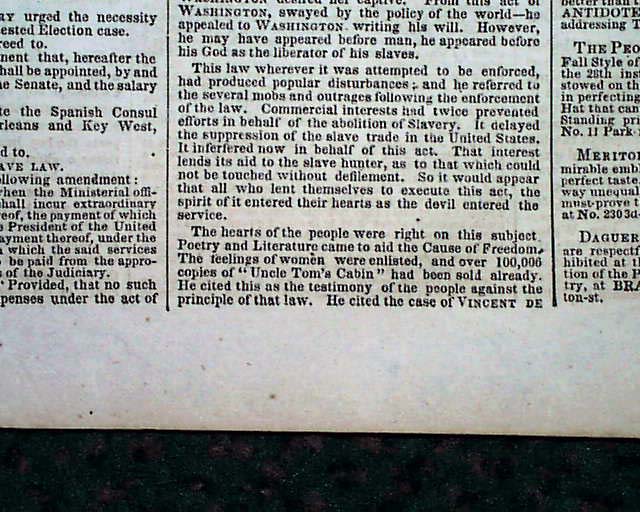 On August 26, 1852, the newly elected senator, Charles Sumner, in defiance of strenuous efforts to the contrary, delivered his 1st major speech before the Senate, taking over 3 hours. During his speech he spoke out against slavery in general, and The Fugitive Slave Act in particular, and instantly establishing himself as a staunch and passionate abolitionist. Taking nearly 2 columns on page 2 are considerable excerpts from this speech. During the speech, and included in the coverage, is the portion where he referenced Harriet Beecher Stowe's "Uncle Tom's Cabin": "The hearts of the people were right on this subject. Poetry and Literature came to aid the Cause for Freedom. The feelings of women were enlisted, and over 100,000 copies of 'Uncle Tom's Cabin' had been sold already." The writer added, "He [Sumner] cited this as the testimony of the people against the principle of that law [Fugitive Slave Act]."

Note: Although not present within this issue, for historical reference, after Senator Sumner completed his speech another senator suggested that there not be a response to the speech. He is quoted as saying: "The ravings of a maniac may sometimes be dangerous, but the barking of a puppy never did any harm."

Additional news includes two lengthy articles regarding the tragic sinking of the Steamboat "Atlantic" in which 67 Norwegian emigrants perish.

Complete in 4 pages and in very good condition. see images for details.