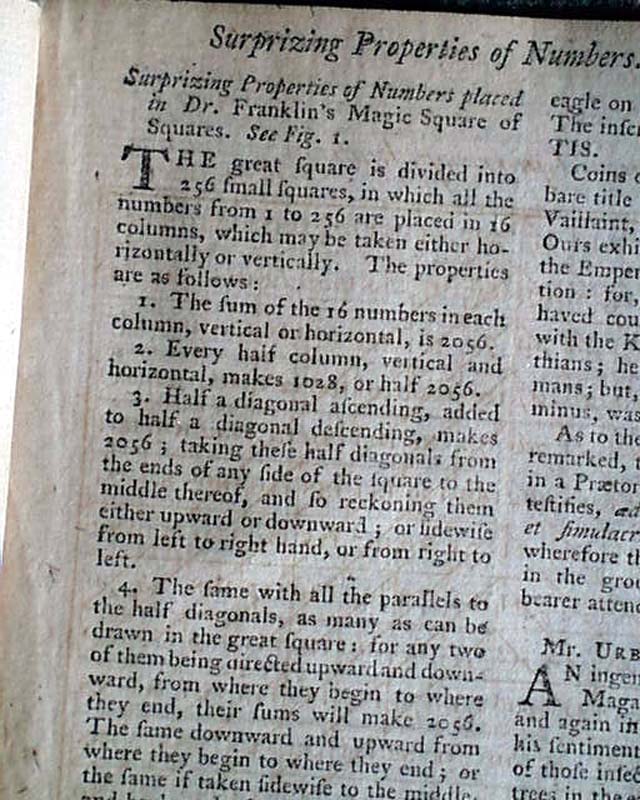 
THE GENTLEMAN'S MAGAZINE, London, July, 1768 (offered at a significantly reduced price - see note regarding the magic square plate)
Perhaps the most notable content is the article on an inside page titled: "Surprising Properties of Numbers placed in Dr. Franklin's Magic Square of Squares," which is a fascinating article describing Benjamin Franklin's amazing numerical puzzle. The accompanying full page engraving of this "Magic Square of Squares" was not present within this issue, but a photocopy  from another issue is included.
Page 2 has "Interesting Advices from America" with a Boston report beginning: "Last Friday fe'nnight the officers of the customers made a seizure of a sloop belonging to John Hancock..." with more, followed by other reports of troubles in America.
The ship Liberty was originally owned by Hancock. In 1768 British officials alleged that Bostonians locked a customs official in the Liberty's cabin while the cargo of Madeira wine was unloaded in an effort to evade the Townshend Acts. In retaliation the British government confiscated Liberty & it was towed away. Smuggling charges against Hancock were eventually dropped but Liberty remained confiscated.
Among various reports under the "Historical Chronicle" is an item noting: "Letters from Fort Pitt in America are full of joy on the success of the late congress held there for settling annually all difference with the Indian tribes in that quarter...the famous major Rogers has turned traitor to his country & is now in irons for a conspiracy in order to surprise several fortresses, to kill the commandants, plunder the garrisons, & desert to the enemy."
Among other articles in this issue are: "Observations on Insects Affecting Fruit Trees" "Hint for the Institution of Downing College" "The Gigantic Stature of the Patagonians Confirmed" & "French Claims on Newfoundland".
The other plate called for: "Lord Chief Justice Mansfield" is present as well.
Complete in 48 pages, full title/contents page, 5 1/4 by 8 1/4, a bit of chipping at the top margin of the title page, good condition.