Home > Back to Search Results > Washington proclaims a day of thanksgiving... Both plates included...
Click image to enlarge 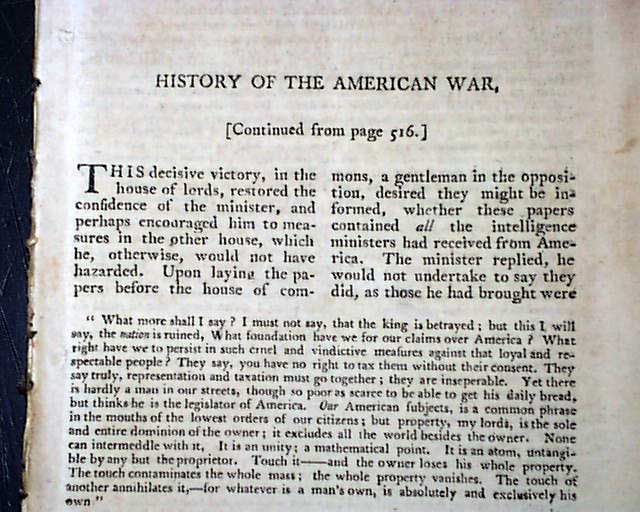 Washington proclaims a day of thanksgiving... Both plates included...

Item # 652719 THE COLUMBIAN MAGAZINE, Philadelphia, October, 1789
The issue begins with a continuation of the "History of the American War" which takes 8 pages & continues in a future issue. Other articles include: "Memoirs of the Bastille" "A Short Description of the Country between North River and Morristown, near New Windsor, New Jersey" includes the related full page plate (rarely found).
"A Description & Explanation of Mr. Joseph Jacob's New Constructed Carriage Spring" is also accompanied by the full page plate.
Near the back is the "Chronicle" with the latest news reports including much on the French Revolution.
News from the "United States" includes a letter from the "Western Territory" from the "Rapids of the Ohio" which begins: "Our affairs in this quarter bear...a very gloomy aspect. the Indians are daily committing depredations in Kentucky..." with more. A report from New York notes: "This day the president of the United States issued his proclamation recommending and assigning Tuesday the 26th of November next, to be observed as a day of general thanksgiving throughout the United States of America." which was the very first Thanksgiving Proclamation by a President, to be made a national holiday by Abraham Lincoln in 1863. Other news reports as well.
Both plates called for are still present: a rare occurrence. The plate showing the road from New Windsor to Morristown has some staining.
Contains 58 pages, lacking the title/contents page, 5 by 8 inches, good condition.