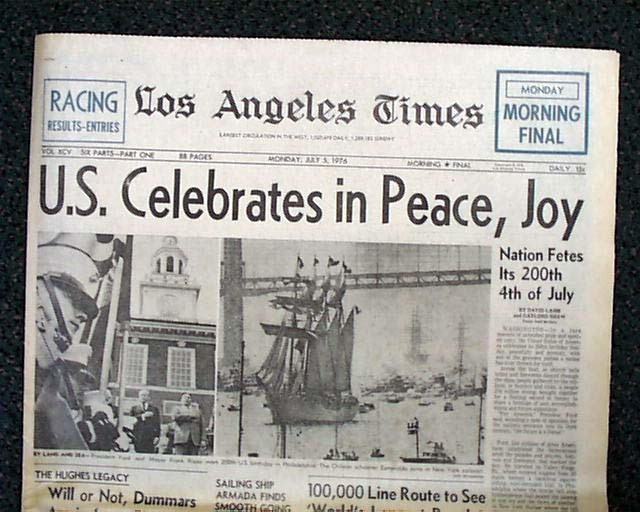 A terrific issue on the celebration of the Bicentennial of The United States. The front page has several photos, including a banner photo captioned, "BY LAND AND SEA...," split between a shot showing the tall ships in the New York Harbor and another showing President Gerald Ford and Philadelphia mayor Frank Rizzo. Headlines include: "U.S. Celebrates in Peace, Joy," 100,00 Line Route to See 'World's Longest Parade'," "Sailing Ship Armada Finds Smooth Going," and more. Additional coverage and bicentennial themed articles, ads, and photos are found throughout.
In a odd twist of providence, The View (section) features an article and photo of Neil Diamond who would release one of his most popular songs, "America," in less about 4 years. Also present is an advertisement for the "Billy Graham Bicentennial Festival of Faith" - to be held in Williamsburg, Virginia.

The issue is believed to be complete, but is being offered for the Bicentennial content. A bit of typical browning at the mid-fold, but in overall good condition.

Note: One might think newspapers featuring such a recent and notable event would be quite common, but we have actually come across relatively few.